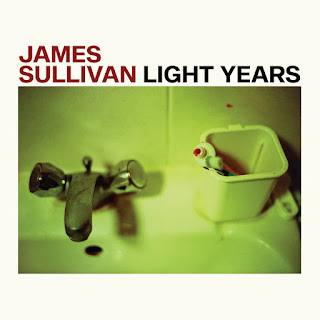 When I heard that James Sullivan was releasing a home-recorded solo album, I was excited. When I heard that it would be a major departure from his work with More Kicks and Suspect Parts, I was at least slightly concerned. I had visions of Sulli trying his hand at screamo or making his own version of Metal Machine Music. I am happy to report that Light Years (out now on Stardumb Records) is "different" in a totally good way. If you are a fan of Sulli's singing and songwriting, you are guaranteed to enjoy this album.

Light Years is Sulli's "pandemic album". Almost all of us had our particular moment when 2020 hit us the hardest. For Sulli, that moment was November 2020. Months of canceled gigs and forced isolation finally got to him. He channeled his frustration and despair into a creative endeavor -- challenging himself to write ten songs in ten days. He then recorded the album at home in North London on a "half-broken" Tascam 38. For Sulli, this project was the "antithesis of overthinking". Since the songs were not being written for a live band, he was free to experiment with styles and go wherever his inspiration took him. He recorded the album entirely in live takes and chose to not edit out any of the "mistakes".  Although several friends make guest appearances, Light Years is about as DIY as it gets. This is the sound of one man making music in his room -- playing (almost) all of the instruments himself and doing his best to capture it all on tape. And yet these songs don't sound half-assed or "crappy" in the slightest. The homemade feel gives this album tremendous charm. Light Years affirms that James Sullivan is an exceptionally talented songwriter capable of crafting marvelous tunes in a variety of styles.

Touching on everything from Brit-pop to folk rock to new wave to indie rock, Light Years finds Sulli breaking out of the power pop box but still embracing catchy, melodic tunes. Album opener "Lea Bridge" lays a stream of conscious spoken word narrative over a Brit-pop background, and it's absolutely captivating. "Getaway" is excellent DIY post-punk rivaling Andrew Anderson's recent solo work. "It Won't Do You Harm" is a simple but gorgeous acoustic number. "Totally Bored" brings to mind the noisier, fuzzed-out side of early '90s indie rock. "You Kept My Heart Alive" could almost be a More Kicks song. "In the End" is a good melodic track with a '70s light rock vibe to it. "Up To My Neck Again" reminds me of something Billy Joel might have written decades ago. And to cap it all off, Sulli covers The Proclaimers' deep cut "Then I Met You" and makes it his own in the most wonderful way.

I've read the promotional materials for Light Years and seen the comparisons being made. They're all quite valid. But I'm going to keep it simple and recommend James Sullivan's debut album to fans of...James Sullivan! Even as Sulli branches out stylistically, his phrasing and melodic songwriting style remain familiar and comforting. Listening to Light Years is like spending a delightful half hour with an old friend. It's a fine solo debut from one of the best songwriters out there. Unfortunate circumstances may have compelled its creation, but here's hoping that we have not heard the last of James Sullivan as a solo artist!