The Chelsea Curve - "Top It Up" 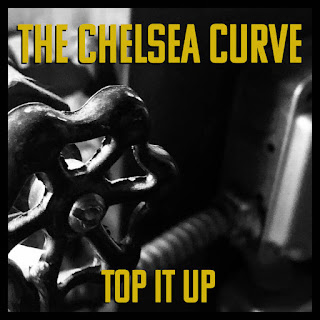 It's hard to believe that we have finally reached the end of The Chelsea Curve's "The Singles Scene" series! Since March, the Boston trio has released a new single every month on Red On Red Records. It seems like a mere instant ago that we were all wishing 2020 could be over, and now here we are almost through another year! The Chelsea Curve has definitely made the most of this year. Eight singles in eight months is an impressive feat by itself. But beyond that, all of these singles have been so freaking good! "Top It Up" is a fitting final installment and easily one of the best of the bunch. It's a feelgood song for feelbad times. Its message is that when life becomes overwhelming, it's okay to take a break and "double up on all the good stuff". While this song is not specifically about pandemic life, just about anyone can relate to the line "All this zooming around/all this running backwards" at this moment in time! Musically, this is a vintage Chelsea Curve number: upbeat punky pop with a Motown/girl group influence. And who doesn't love singing along to a refrain like "Heyo, Heyo!"? It's just a super fun song that manages to be life-affirming even as it confronts the on-going struggle of existence. Doubling up on all the good stuff is a cause I wholeheartedly endorse -- I have even hit the pause button on my daily work to get this review written! If you follow Linda's lyrics the whole way through the song, you'll notice a subtle change at the end that reflects how the pandemic experience has altered our perception of what it means to "take a break". "Top It Up" is a mod-pop anthem for our times and all times.

With "The Singles Scene" now wrapped up, you can expect a full-length album from The Chelsea Curve in early 2022. It will include all of the singles in remastered form plus some old live favorites and some brand-new tunes. I haven't even decided on my top albums of 2021 yet, but I've already penciled in The Chelsea Curve as a prime contender for next year's top spot!

Thank you so much, Lord Rutledge! Love, The Chelsea Curve xoxo!