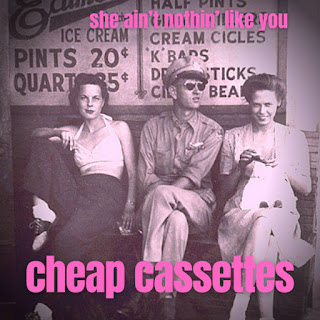 Now this was a really wonderful surprise! Seemingly out of nowhere, The Cheap Cassettes have dropped another sneak peak of their soon-to-be-released second album Ever Since Ever Since! Back in September, the band released the brilliant track "Endless Summer Ends". Now they've followed with the digital single "She Ain't Nothin' Like You". The "A-side" is the lead track off of the new album (due out January 14th on Rum Bar Records). It sure sounds like a hit to me! This is the vintage Cheap Cassettes sound: classic power pop steeped in great American rock and roll. The song comes on with a cool driving guitar riff, a super-catchy chorus, and marvelously bitter lyrics. And of course you can expect a damn fine guitar solo! If you dig the Twilley/Groovies/Big Star strain of power pop, you should be all over this track. But wait! There's more! "Cold Sundays" is something quite different for The Cheap Cassettes. It's a melancholy acoustic number that seems perfect for this time of the year. We've all been waiting for Charles to unleash his inner Paul Westerberg on record, and this is the moment. I'd like to play this song while I'm drinking a beer on the porch and reflecting on my life. I actually don't have a porch, but this song would be ideal for contemplative solitary walks in the autumn breeze. That Charles Matthews can sure write a song that tears your heart out!