Vista Blue - Back to the Summer Olympics 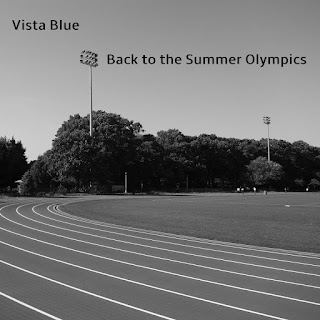 Sequels are almost never as good as the original, but every so often they are. Five years ago, Vista Blue released "At the Summer Olympics", an absolutely magical ode to the 2016 Rio Games. And now with the 2020 Summer Olympics in full swing, Vista Blue is back with a sequel appropriately titled "Back to the Summer Olympics". It's the lead track off of the band's new EP -- which you can download for free from Bandcamp. In preparation for reviewing the sequel, I revisited the original and judged it to be in the top tier of all Vista Blue songs. But I've got to say that "Back to the Summer Olympics" belongs in that rare category of sequels that equal or even surpass the original. It's got everything you could want from a Vista Blue song: a tuneful melody, strong harmonies, endearing lyrics, and an absolute earworm of a chorus. You even get a keyboard solo! And without spoiling anything too much, I'll just say that you should listen to this track before you dismiss it as just another Vista Blue "sports song". How does this band manage to be so incredibly prolific yet still delight me every single time? Rounding out the EP are a couple of splendid tracks. "Hey Anthony" clocks in at just a couple ticks past a minute-and-a-half and finds Vista Blue worshipping at the church of the Ramones. It's not easy to write a song this simple and still have it be so catchy and irresistible, but that's exactly what Mike and Mark have pulled off here. To say this track lends itself to singing along would be the understatement of the year! If a song like this had existed when I was six years old, I might have actually started listening to punk in 1977! "It's Summertime Again" is a song that Vista Blue originally contributed to the Ramonescore Radio Records compilation 20 Original Summer Hits. This is the ultimate summertime track. It's an upbeat tune about having fun in the sun, listening to music, and destressing after a difficult year (a very pertinent message for this particular summer!). Did I hear a Zatopeks reference?! If you dig this track, I recommend checking out the full compilation, which features a whole slew of today's top pop-punk and power pop bands.

I have it on very good authority that several more Vista Blue releases are due out by the end of this year. I say bring 'em on! "Back to the Summer Olympics" is the "Let's Twist Again" of pop-punk!