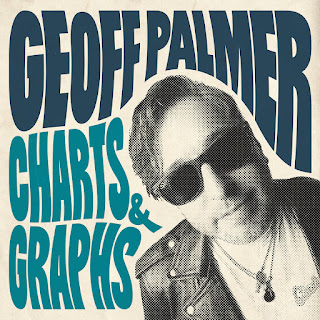 Geoff Palmer has been a favorite of mine since the earliest days of F & L. With The Connection, The New Trocaderos, and Kurt Baker Band, he's been a huge part of several albums that have influenced the musical direction of this blog. As a a solo artist, he's been one of the brightest stars of contemporary pop-punk and power pop. Last year, he and Lucy Ellis almost managed to redeem 2020 with a delightful collection of duets titled Your Face Is Weird. So when I heard that Palmer was releasing a new LP this year, it immediately became one of my most looked-forward-to albums of 2021. Out today on Stardumb Records, Rum Bar Records, and Memorable But Not Honorable, Charts & Graphs is Palmer's second solo LP. And it does not disappoint!
Like 2019's Pulling Out All The Stops, Charts & Graphs rolls together power pop and pop-punk in a way that's pleasing to fans of either genre. And much like Your Face Is Weird, this album finds Palmer expanding his core sound with songs in a variety of musical styles. If you're craving "vintage" Geoff Palmer punky pop tunes, songs like "Many More Drugs", "Don't Be", and "Tomorrow" are guaranteed to satisfy. But some of the true gems of this album are more unexpected. The title track, written by Emma Tobin, is a poignant breakup song that's both clever and devastating. The country rocker "Count Me In" pairs an upbeat, hard-driving energy with highly philosophical lyrics about the nature of the afterlife. "What Would Paul Westerberg Do" has a lot to live up to based on its title, but it proves to be a satisfying homage in every respect. And I'm totally obsessed with "This Monkey", a song Palmer co-wrote with Zack Sprague. It's unlike any song Palmer has ever recorded before. It's kind of poppy, kind of modern rock-ish, and so sneaky catchy that it'll be stuck in your head before you even know what hit you. The vocal exchanges between Palmer and Sprague on this track are pure gold!
Charts & Graphs is everything I wanted it to be and more. It shows the many sides of Geoff Palmer while still embracing his roots in pop-punk. In a modern-day power pop punk scene that can sometimes get a little "samey", Palmer is one of the true originals. When you hear one of his songs, you know it's him. His personality comes shining through on Charts & Graphs. Whether he's recounting amusing tales of misheard song lyrics, reflecting on the importance of not being an asshole, lamenting love gone wrong, or pondering the upside of eternal damnation, he's super likeable and always great fun to listen to. For my money, he's one of the best songwriters in rock and roll today. I highly recommend Charts & Graphs to all fans of good music!
-L.R.
https://geoffpalmer.bandcamp.com/album/charts-graphs
https://rumbarrecords.bandcamp.com/album/charts-graphs
https://www.facebook.com/GeoffPalmerMusic/
https://www.facebook.com/RumBarRecords
https://www.stardumbrecords.com/products/geoff-palmer-charts-graphs-lp
https://www.facebook.com/stardumbrecords/
https://www.facebook.com/mbnhtapes
Posted by Lord Rutledge at 8:37 AM