Pale Lips and The Sorels - Do The Rumbar Rumble 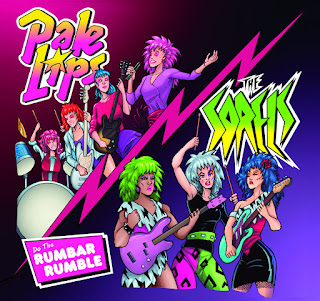 The latest chapter in the momentous alliance between Pale Lips and Rum Bar Records is a very special split CD release. Do The Rumbar Rumble pairs of two of Canada's biggest rock and roll sensations in Montreal's Pale Lips and Winnipeg's The Sorels. Now sadly this is not new material from either band, but it does compile the tracks from each band's long out of print first two seven-inches. The first three Pale Lips tracks date all the way back to 2015's debut single Got A Sweet Tooth. I had not listened to these songs in a long time. Upon revisiting them, I've found that I still really like them! These were the songs that made me a Pale Lips fan. They're definitely a little rawer compared to later recordings, but I kind of like that. From the start, the band's smarts, sense of humor, charm, and flair for fun catchy tunes were simply undeniable. If you're out and about and see some crazy person in headphones joyfully singing the lyrics, "I'm dreaming of killing you", it's probably just me. The progression between that first single and 2017's Should've Known Better! is quite striking. "Don't Take Your Switchblade to New York" remains an essential Pale Lips track (and essential life advice!).

The four Sorels tracks on Do The Rumbar Rumble are the only four songs that this band has officially released. These songs originally came out on two singles co-released by Reta Records and Surfin' Ki: 2019's "She's In The Gang" and this year's "Spring Break". And since those two records sold out before you even had time to blink, this CD is your best hope of procuring these tunes in a tangible format. Both of the A-sides mix pop hooks with punky rock and roll energy and classic girl group influences. The B-sides, "School Girl Blues" and "Palo Santo", find the band embracing its tougher-edged glam and rock side. Just you wait until The Sorels release an album...you're all gonna go nuts! Join the fan club now before the lines get too long!

So who wins this rumble between two of Canada's finest? That's easy: we all do! It just makes sense for all of these songs to be on the same album. Pop this disc into your CD player, and you've got yourself a party for the next 23 minutes. And that artwork? Oh my god!