Rinehearts - "One Thing One Time" 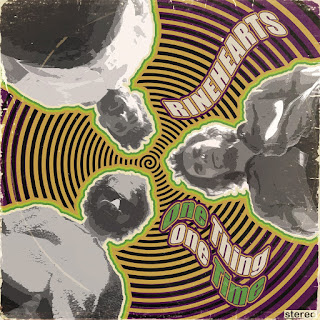 Rinehearts are a trio out of Perth, Australia following in the city's grand tradition of power pop. In fact, Perth's power pop godfather Dom Mariani is a big fan and will be assisting in the production of the group's forthcoming sophomore LP! In advance of the new album, the band has released a single on Melbourne-based Cheersquad Records & Tapes. "One Thing One Time" was recorded with long-time friend and engineer Al Smith at Musgrove Studios and then completed at the band's self-built Pink House Studios. It's a jangly garage/power pop number that sounds like something you would have heard on college radio in the 1980s or early '90s. It reflects on the importance of slowing down and dealing with things as they come -- which is very sound advice in these trying times. I last reviewed Rinehearts when they released their debut EP in 2016. That EP was recorded when the band was just a few months into its existence. Since then, the group has built off of the raw potential of that first release and grown into a truly fantastic pop band. I highly recommend checking out Rinehearts' debut album Can't Do Nothing from 2019. The band is currently hunkered down in its studio working on the follow-up!
-L.R.
https://cheersquadrecordstapes.bandcamp.com/track/one-thing-one-time
https://www.facebook.com/Rinehartsband/
https://www.facebook.com/CheersquadRecordsTapesMGMT
Posted by Lord Rutledge at 9:01 AM