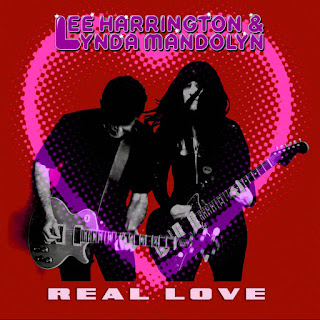 How about another another "super duo"? Lee Harrington (The Neighborhoods, The Shang Hi Los) and Lynda Mandolyn (Tiger Bomb, Fabulous Disaster) are household names in the power pop/punk-pop universe. Admirers of each other's online releases and digital performances in 2020, these two tremendous talents decided to start a band together! They collaborated long distance, with Harrington recording in Boston and Mandolyn recording in Portand, Maine. Chuck Ferreira, Harrington's bandmate in The Shang Hi Los, was recruited to play drums. My god: what a lineup! "Real Love", the debut single from Lee Harrington & Lynda Mandolyn, is out now on the always fabulous Red On Records. And let me tell you: it does not disappoint! This just might be my favorite single of the year so far! It's an upbeat punky pop tune built around a well-crafted and totally irresistible melody. It's performed as a duet -- with both vocalists trading parts and also singing in harmony. One of the hardest things to do in music is to create a "positive" love song that doesn't make people want to puke. But that's exactly what Harrington & Mandolyn have pulled off here. Harrington's lyrics champion the notion of true love in a way that comes off as relatable and completely real (no pun intended). If you took a classic Buzzcocks song and replaced the cynicism with optimism, it would sound an awful lot like this. What a perfect pop song!
Any fan of power pop had to be excited by the idea of Lee Harrington and Lynda Mandolyn collaborating. The only unknown was how their voices would sound together. Well, it's clear that they sound great together! Let us hope for much, much more music to come from Lee Harrington & Lynda Mandolyn!
-L.R.
https://leeharringtonlyndamandolynred.bandcamp.com/
https://www.facebook.com/LeeHarringtonLyndaMandolynMusic
https://www.facebook.com/redonredrecords
Posted by Lord Rutledge at 10:14 AM