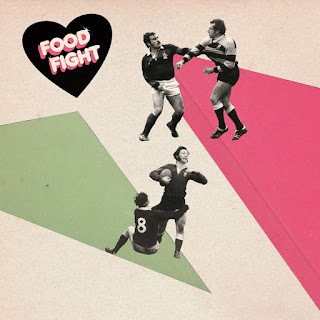 This is turning into the year of French power pop! Pogy et les Kéfars released a terrific album a few weeks back, and now Food Fight has released its debut single on Snap!! Records. And you know if it's on Snap!!, it's gotta be good! Food Fight is based in Rennes and features members of The Headliners, Cheap Riot, The Ready-Mades, and Abuse. Basically this is a French band in 2021 that sounds totally like a U.K. band from 1979! The musical style is a mix of mod, power pop, and late '70s English/Irish pop punk. The press release mentions The Nips as a point of reference, and that's pretty spot-on! I don't think it's possible to go wrong emulating The Nips! This release contains four mid-tempo tracks that will appeal to both mod revival enthusiasts and fans of today's punk/powerpop. Vinyl is limited to 300 copies, so hit up the Snap!! Bandcamp page if you're interested!
-L.R.
https://snaprecordsspain.bandcamp.com/album/food-fight-ep-fun-7049
https://foodfightpowerpop.bandcamp.com/releases
https://www.facebook.com/foodfightpowerpop
https://www.facebook.com/SnapRecordSpain/
Posted by Lord Rutledge at 6:55 AM