The Peppermint Kicks - self titled 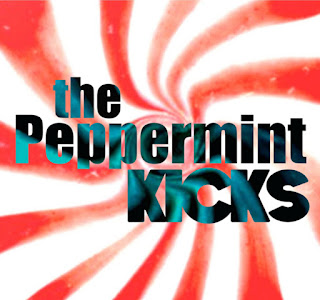 So you like the pop side of rock and roll, but you still need it to really rock? Well then The Peppermint Kicks are the band for you! Co-fronted by Dan Kopko (Watts, The Shang Hi Los) and Sal Baglio (The Stompers, The Amplifier Heads), The Peppermint Kicks are a throwback to the days of CREEM magazine, Don Kirshner's Rock Concert, $7 arena shows, and band posters all over your bedroom wall. The band's self-titled debut album releases today on the mighty Rum Bar Records. This ten-song long player would not have sounded out of place on your teenage turntable alongside T. Rex, Cheap Trick, the Ramones, and The Who. Equal parts glam rock, power pop, first wave punk, and big hooky classic rock, The Peppermint Kicks sound has been likened to "a cool drink of strawberry lemonade, with a sprig of mint and a gut-punch chaser". Yum! Kopko and Baglio are both longtime fixtures of the Boston rock and roll scene. Combining the musical visions of both of these artists (much of it shared), you get a killer rock and roll band steeped in the timeless traditions of pop songwriting. What could be better?
I love that The Peppermint Kicks have come out big! The band kicks off its debut album (and entire discography) with a full-on rock anthem in "When Rock & Roll Met Your Dad". An epic love letter to rock and roll, this is the perfect introduction to The Peppermint Kicks and what they're all about. It's immediately followed by "Hey Fanzine!", which takes us back to the glory days of the rocking power pop radio hit. Building off such an auspicious start, the album proceeds to take you on a whirlwind tour of the coolest sounds of rock and roll's heyday. "Strawberry Girls" is a snappy, melodic tune that sounds like it could have sprung from the later '60s U.K. "I Don't Hear A Single" is a timeless pop song that ironically sounds...like a single! "Johnny D's (Play It Again)" is a vintage Danny The K fists-in-the-air sing-along rocker. "Shag '72" is an old style rock and roll toe-tapper with hooks for days. "Stooge" channels peak-era Rolling Stones. To my absolute delight, "Rock & Roll Rampage" embraces nearly every arena rock cliché in the book.
It is 100% safe to say that any fan of Watts or The Amplifier Heads will love The Peppermint Kicks. You get the best of both bands here. Kopko and Baglio both sing, play guitar, and contribute some piano and percussion. Lead songwriting duties are split 50/50. Legend has it that the ghost of Little Richard commanded these two individuals to join forces. I, for one, do not doubt that narrative. This band and this album are a celebration of a moment in time when rock was king. Every song is a hit -- unless it's an anthem. And while no one is getting rich these days writing rock and roll songs with great hooks, you know you've made it when the likes of Palmyra Delran and Genya Ravan are singing your praises. Whether you were a teenager in the '70s or simply wish you could have been, this pop-rock cocktail ought to hit the spot!
-L.R.
https://rumbarrecords.bandcamp.com/album/the-peppermint-kicks
https://thepeppermintkicks.bandcamp.com/releases
https://www.facebook.com/thepeppermintkicks
https://www.facebook.com/RumBarRecords
Posted by Lord Rutledge at 8:26 AM