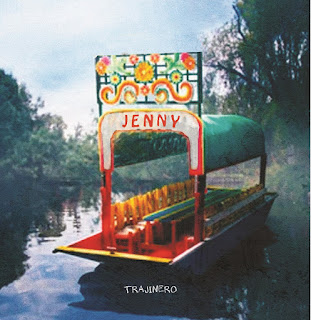 As you may know, JENNY is the solo project of a great friend of this blog -- Justin Maurer (Clorox Girls, Maniac, Suspect Parts). "Trajinero" is JENNY's debut Spanish language single and second release overall. It will be coming out as a 7" record on Wanda Records in Europe and Dirt Cult Records in North America. "Trajinero" is something a little different from Maurer. He recorded the track with Jacobo Fernandez (Las Bruscas, Les Tragiques, Desobedientes) and Gabriel Lopez (Espectroplasma, Sonido Gallo Negro) in Mexico City in November of 2020. Co-written by Maurer and Fernandez, the song is loosely based on the plot of Emilio "El Indio" Fernández's 1943 film Maria Candelaria. Its protagonist is a lovelorn working-class trajinero who commits a crime of passion and must face the consequences. In just a few lines, the song tells an epic tale. Yet even with such dramatic themes, this is an immensely fun song that ought to have you dancing and singing along in short order. Man, I love those keyboards! A truly amazing music video for "Trajinero"  (embedded below) was animated by Miguel Jara and Celestial Brizuela.

"Trajinero" is backed with "Kids of Today", which Maurer recorded in Los Angeles with his former LA Drugz bandmates Cezar Mora, James Carman, and Johnny "JD" Reyes. The track is a classic shot of power pop punk in Maurer's signature style. What a powerhouse single! The digital release of "Trajinero" is available now from JENNY's Bandcamp. Hit up Wanda Records or Dirt Cult Records to pre-order vinyl!