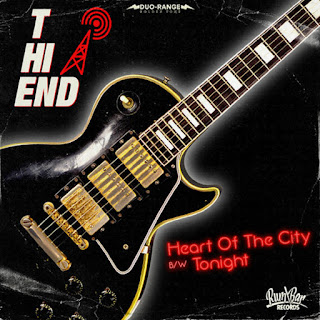 Oh boy! The Hi-End has ripped out a pair of choice covers on its hot new digital single! Having already released one of 2020's finest rock and roll long players in the Rum Bar Records issue Class Kicks, this Boston five-piece is back with smoking renditions of a couple of classics. While The Hi-End is a band inspired by all of the great eras of rock and roll, the two cover selections here really hit the intersection of pub rock, power pop, and first wave punk. And you know that's a real sweet spot for me! "Heart of the City", of course, is the Nick Lowe classic. "Tonight" is from the first album by The Boys - one of my personal favorite U.K. '77 punk groups. Both songs were among the first The Hi-End ever played together as a band. That tells you a lot about what The Hi-End is all about. Beyond that, these versions give you a great idea of what an absolutely killer band this is! When live music is a thing again, these guys will be a must-see! If you've been sleeping on Class Kicks, perhaps this new single will compel you to give it a listen. New version of the album from Rum Bar has the single tacked on as bonus tracks. Check it out!
-L.R.
https://rumbarrecords.bandcamp.com/album/heart-of-the-city-b-w-tonight
https://thehi-end.bandcamp.com/
https://www.facebook.com/theHiendband/
https://www.facebook.com/RumBarRecords
Posted by Lord Rutledge at 7:44 AM