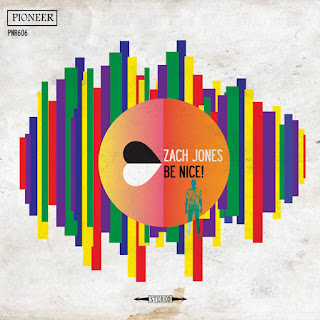 I've had the pleasure of writing about Zach Jones a few times in the past. For my final music review of 2020, I have the pleasure of writing about his latest release. Be Nice! is a compilation of sorts, built around seven tracks Jones released as a series of digital singles between October of last year and September of this year. With the addition of four previously unreleased tracks, these collected singles form what Jones calls a "brand new listening experience". The new material, in addition to being of an exceptional quality, flows seamlessly into the songs from the singles. Far from just a collection of songs, these 11 tracks make for a cohesive and truly splendid album.

There are two things that have always stood out to me about Zach Jones. Firstly, he has one of the most beautiful singing voices in all of contemporary rock music. In addition to that, there are few artists as gifted at crafting songs grounded in pure melody. I would describe Be Nice! as the ultimate album for fans of melodic music. On these 11 tracks, Jones taps into his love for everything from the British Invasion to psychedelic rock to baroque pop to '70s soft rock to classic soul music. Jones never ties himself to one genre, but I suppose the broad term "pop" sums up his appeal. His songs are full of interesting stories and moving personal reflections, but at the heart of everything he does are gorgeous melodies, harmonies to die for, and lush instrumentation that always serves the song. Even if you've already bought the singles, this album's title track alone is worth the price of admission. It's absolutely majestic. And with the way it flows into a stunning rendition of the Beach Boys' "I'll Bet He's Nice", it's clear that these two songs were paired together by design. "Jim & Jane (Not Gonna Worry About)" finds Jones slipping through a portal to 1974 and is truly cinematic in its storytelling. "Best Thing To Happen" could almost pass for a lost track from The Zombies' Odessey and Oracle. The singles, even if you know them already, are well worth hearing again as part of this sequence. Songs like the deeply contemplative "October's Almost Over", the jangly "Like The Tide", and the smoothly soulful "I'll Be Home (Xmas Day)" are without doubt among the finest songs Jones has ever written.

I love the optimism of Jones subtitling Be Nice! as "The Singles Collection, Vol. 1". That implies, of course, that many more singles are coming. Given Jones's appreciation for the timeless melodies of classic popular music, the single format is a great way for him to release music. Don't get me wrong: sometimes an artist can sit down and write an album by design. But there's also a great beauty in releasing just one or two songs at a time and allowing listeners to savor every note. And then when it comes time to compile the singles, there's no filler to cut out! If you enjoy melody-driven pop music, you need some Zach Jones in your music collection. And Be Nice! would be a perfect place to start.