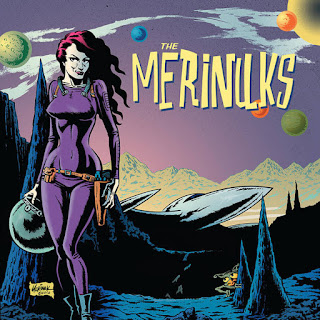 Check it out: a sequel that's even better than the original! How often does that happen? The Merinuks made a big splash debut with their EP1 earlier this year. But Donn, Larry, and Adam have absolutely outdone themselves with the newly released EP2! To recap, these Hamilton, Ontario goofballs named themselves after the legendary artist Darren Merinuk - who was so honored that he ended up designing the band's logo and cover art! The Merinuks' music is a great mix of punk, garage, and rock influences with a snotty but totally fun attitude. If EP1 was a little more on the garage rocking side of things, EP2 swings farther in the punk direction. Think early Canadian punk meets The Replacements circa 1981! "Gary's In Trouble" is an 87-second shot of pure punk rock energy that ought to have you shouting along and hoisting your beer in the air. "I'm Mean" and "Bent Outta Shape" are catchy punk tunes rooted firmly in sloppy rock and roll. "King Merinuk", the "epic" track on this release at just a few ticks over three minutes, is great campy fun in a Cramps sort of way. And for an added touch of uniqueness, Thea Faulds plays Theremin on a couple of tracks! All in all, this is a completely killer release from a band we're going to be hearing a lot more from. And I mean that literally since another EP is already in the works!
-L.R.
https://merinuks.bandcamp.com/album/ep-2
https://www.facebook.com/themerinuks/
https://www.instagram.com/the_merinuks/
Posted by Lord Rutledge at 8:16 AM