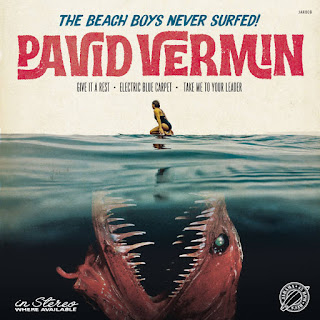 The latest release from the ever-dependable Jarama 45rpm Recs. also happens to be the latest release from the equally dependable Pavid Vermin. Now there's a dream team! After four albums in less than two years, Pavid Vermin has established itself as one of the best pop-punk bands going. And by "band", I really just mean Glenn Robinson making records by himself in his basement. If this year in music has proven anything, it's that homemade recordings don't necessarily have to sound like homemade recordings. After much trial and error, Robinson/Pavid Vermin has really nailed down how to make home-recorded pop-punk music sound like a million bucks. The Beach Boys Never Surfed! features four tracks which are (to the best of my knowledge) exclusive to this 7". Of course the title track is the "hit" here. It might not be common knowledge that the Beach Boys (or least most of them) were not surfers. If hearing this news has you feeling bitterly disillusioned and questioning everything you ever thought you believed, then you will relate to this song well. And even if you're fully okay with some of our greatest American icons being total fakes, you can still appreciate what a kick-ass pop-punk tune this is. Along similar lines, "Take Me To Your Leader" is about being so disenchanted with the world that you're literally looking for a new planet to live on. Talk about an anthem for 2020! The aforementioned tracks are a little more on the pop side of the equation, and balanced nicely here by the faster-paced & punkier "Electric Blue Carpet" and "Give It A Rest". As always, Pavid Vermin is a great band to listen to if you wish more pop-punk bands were a little less into Screeching Weasel and a little more into The Descendents. Vinyl should be out at the end of the month. If you like what you hear, be sure to check out more from this band and record label on Bandcamp!
-L.R.
https://pavidvermin.bandcamp.com/album/the-beach-boys-never-surfed
https://jarama45rpmrecs.bandcamp.com/album/the-beach-boys-never-surfed
https://www.facebook.com/pavidvermin/
https://www.facebook.com/jarama45rpmrecs/
Posted by Lord Rutledge at 7:51 AM