Berk/Lehane - "An Irishman For Christmas" 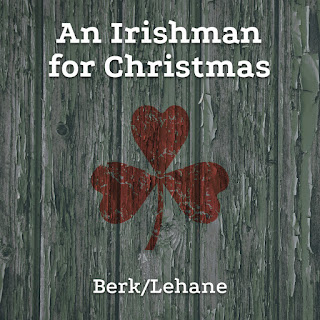 Red on Red Records has been officially launched! Red on Red is the newest venture from Justine Covault (Justine and the Unclean, Justine's Black Threads, WhistleStop Rock). Red on Red has already assembled a fantastic roster including The Neighborhoods, Nightspell, Kid Gulliver, The Chelsea Curve, Cold Expectations, and of course Covault's bands Justine and the Unclean and Justine's Black Threads. The label has also signed Berk/Lehane, a collaboration between Simone Berk (Kid Gulliver, Sugar Snow) and the legendary Jerry Lehane (The Dogmatics). 2020 continues to be the year of Simone Berk - which is one of the few good things that can be said about this year! Red on Red has just released Berk/Lehane's single "An Irishman For Christmas" . Sure, the title brings to mind one of those cheesy Hallmark movies that I can never stop watching. But I can assure you that there's nothing cheesy about this song! Co-written by Berk and Lehane, this song is properly described as "Boston-Irish-interfaith-romance-folk-punk".  It tells the story of a girl transplanted from Cleveland to Boston who dreams of a very special Christmas gift - an Irishman to call her own. If "romance-folk-punk" is an actual genre, that's yet another genre for me to embrace! And Berk/Lehane are supported here by a star cast of Boston musicians: James Young, Ed Riemer, Billy Loosigian, and Norm Hartley. I've jokingly stated that my disinterest in "modern" Christmas music includes anything recorded after 1970. But honestly, "An Irishman For Christmas" is an absolute delight and instantly joins the list of songs I will look forward to playing every year at Christmas time. Was there ever any doubt that a collaboration between these two individuals would turn out amazing? If Hallmark ever does come calling for the movie rights, I hope Simone, Jerry, and Justine hold out for the highest possible compensation!

"An Irishman For Christmas" is just one of two singles that Red on Red has rolled our for the holidays. I will be posting on the other later this week. Also of note, Red on Red will be celebrating its launch with a virtual showcase at ONCE VV this coming Saturday, November 21. The streaming show will feature exclusive, best-of, and rarely seen videos from its artists, including two live videos of The Neighborhoods, new videos for best-of-catalog songs by Kid Gulliver, Cold Expectations, and Justine and The Unclean, special guests appearances by The Dogmatics and Mess Around co-hosts Jay Allen (with his band the Archcriminals) and Tom Baker (with his band The Dirty Truckers), and culminating with the exclusive premier of the Red on Red theme song and video!!  The song was recorded by Justine with David Minehan, Lee Harrington, and Jim Janota, and the video showcases all of the label roster artists and its creative partners. The show wraps with a live chat/interview with label head Justine and some of her roster artists, hosted by DJ JoEllen Saunders Yannis of WMFO's On The Town With Mikey Dee. For more information, check out the Facebook event page or sign up here!