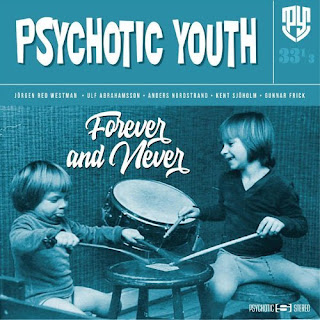 After 35 years, Psychotic Youth still sounds like....Psychotic Youth! The legendary Swedish band has just released its 14th album Forever and Never. In the same vein as the band's 2017 comeback album The Voice of Summer and last year's superb 21, Forever and Never has all the hallmarks of a vintage Psychotic Youth record. It features 15 tracks of classic power pop with touches of punk, surf, and garage rock. Again working with Norwegian super producer Christian Jacobsen (The Yum Yums, The Dahlmanns), singer/guitarist Jörgen Westman has put on another master display on how to write three-minute pop songs that would top the charts in a better world. Also on board are longtime band members Ulf Abrahamsson (guitar), Anders Nordstrand (bass), Gunnar Frick (organ), and Kent Sjöholm (drums). Four of these five have been with the band going back to the very beginning in 1985. Yet after three and a half decades, these guys remain as faithful as ever to their original punky pop blueprint. And the eternal teenager Westman has never stopped writing perfect little songs about the highs and lows of romantic love.
From the snappy power pop of "Come On (And Give Me Something)" to the garage rockin' "Takes You Down" to the '50s inspired "Goodbye Summer" to the sweet & sentimental "Before You" to the ripping punker "Detention", Forever and Never has something for just about everyone. Along the way, the band treats you to some textbook Psychotic Youth numbers ("Don't Be Like That", "Sucker for a Bliss") and a couple of dandy covers (Secret Service's "Ten O'Clock Postman" and The Messengers' "That's the Way a Woman Is"). Not just due to Jacobsen's production touches, Forever and Never ought to appeal to anyone who loves the most recent Yum Yums album. Behold the sweet spot where power pop and bubblegum punk converge. Now as always, Psychotic Youth is the gold standard!
-L.R.
https://psychoticyouth1.bandcamp.com/
https://www.redwest.se/index.html
https://www.facebook.com/pages/category/Musician-Band/Psychotic-Youth-298457281060996/
Posted by Lord Rutledge at 7:43 AM