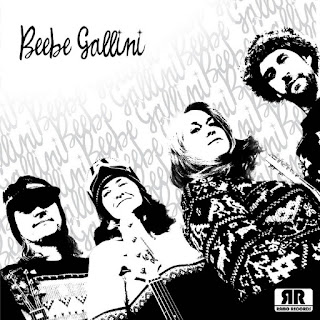 If it seems like I've reviewed Beebe Gallini's "East Side Story" before, well that's because I have. "East Side Story" was originally released as a 7" record on Ramo Records back in March of 2018. It was the vinyl debut from Twin Cities garage rockers Beebe Gallini. The band at the time consisted of Miss Georgia Peach on vocals & guitar, Travis Ramin on lead guitar, Amy Larson Pearson on bass, and Chris Audette on drums. Miss Georgia Peach and Travis Ramin also make up two-thirds of the mighty Short Fuses - who recently teamed up with Rum Bar Records to release the must-have long player Dawn of the Deaf. Now through a partnership between Ramo Records and Rum Bar Records, "East Side Story" is getting a deluxe digital reissue that expands it from two songs to five!
The title track, of course, is a cover of a song that was a regional hit for Bob Seger back in 1966. The vinyl B-side here, "The River Flows", was written by Amy Larson Pearson and is the only original song on this release. I once referred to this song as a "psychedelic spiritual", and I will happily stick with that description. It still gives me chills. The "bonus material" here consists of killer cover versions of lesser known later '60s garage rock sides. "Open Up Your Door" was originally recorded by New Jersey based Richard and the Young Lions in 1966. "Hipsville 29 BC (I Need Help)" was a minor hit for Texas garage band The Sparkles in 1967. "Nobody Loves the Hulk" was written by Roz Rogoff and recorded by The Traits in 1969. Beebe Gallini's version was recorded in 2018 as a tribute to Stan Lee and a celebration of the original song's message of empathy and acceptance.
In my mind, I like to think of Beebe Gallini as America's premier cold weather garage rock party band. I picture them playing to packed crowds at ski lodges, ice skating rinks, and winter festivals as fans dance the night away and double fist hot chocolate. Sadly, there will be no Beebe Gallini live shows anytime soon. But you can still get in the spirit by downloading this EP, donning your best winter hat, and having your own private cold weather fest. "The River Flows" is amazing, and all of the covers are as crackling as the Midwest winter wind. If you're a garage rock fan, you need some Beebe Gallini in your life!
-L.R.
https://rumbarrecords.bandcamp.com/album/east-side-story
http://beebegallini.com/
https://www.facebook.com/WeAreBeebeGallini
Posted by Lord Rutledge at 8:14 AM

I think Alice Cooper did a cover of Seger's East Side Story not too long ago as well. Didn't know about this one though. Thanks! - Mike