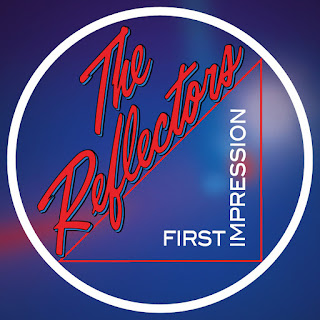 The month of power pop continues! If you'd told me back in January that 2020 would bring us a new Speedways single plus new albums from The Vapors, Duncan Reid and the Big Heads, Nick Piunti & The Complicated Men, and The Reflectors, I would have said we were in store for a really great year. I sure would have been wrong about that! But the fact that all of this music has come out in a matter of three weeks is pretty incredible (and perhaps very taxing on your budget!). Once I discovered that The Reflectors were putting out a full-length, that quickly became my most highly anticipated album of the year. Now it's here, and it does not disappointment!

Out on Time For Action Records, First Impression combines the best elements of late '70s/early '80s power pop with a touch of modern-day powerpop/punk. Three-quarters of The Reflectors used to be a terrific punk/pop trio called Images. James Carman (LA Drugz, Telephone Lovers, Maniac) moved from drums & vocals to guitar & vocals, with Johnny Reyes joining on drums. Although quite a few of the songs on this album date back to Images days, the change in band name seems to reflect (no pun intended, I swear!) a slight progression in sound. First Impression features 11 tracks of quintessential Southern California power pop. Carman and fellow singer/guitarist Nick Faciane write songs about classic themes like heartbreak, longing, and unrequited love. That's pretty much the power pop holy trinity right there, and these guys convey those emotions quite convincingly in their vocals. The best power pop has a way of delighting your senses and tearing out your heart at the same time. And that's the playbook The Reflectors follow: big punchy guitars, catchy melodies, and lyrics wrought with teenage frustration. Last year's outstanding single "Teenage Hearts" and the pre-album teaser "Champagne" set the bar pretty high, but the rest of songs prove to be just as good. I can't quite decide which track is the "hit" because nearly every song here sounds like one. That makes sense since these guys were able to cherry pick the best songs they've written over the last eight or nine years. Even down the final stretch of songs, I'm hearing tunes that easily could have been A-sides.

As expected, The Reflectors have placed themselves in the thick of the album of the year conversation with First Impression. This is classic power pop that feels new and fresh because, well, matters of the heart never go out of style! Whatever artificial intelligence Bandcamp used for its "If you like The Reflectors, you may also like.." feature was totally spot-on because the first two bands mentioned are The Whiffs and The Speedways. Add The Reflectors to that pair, and you've got the best of the new generation of power pop. If you want to feel 16 again, just put on First Impression and close your eyes.

Uauuuuuuhh !!!! Amazing powerpop tunes from this authentic group.
I would like recomended THE BEATPUNKERS ( Basque country group ) with Better times single song.
I want say you this is THE BEST power pop blog of the World.
Congratulations from Funkyjoseb from Basque Country ( Spain )

This album is amazing!