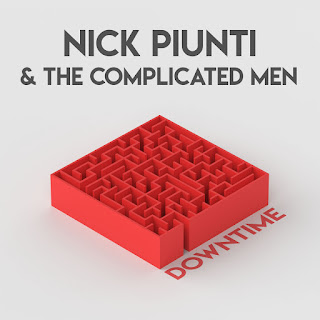 Nick Piunti is one of our greatest present-day pop songwriters. He could have released ten more albums just like his last four, and I would been more than happy every single time. But I must admit I'm really excited to hear him working as part of a full band again. Out now on Jem Records, Downtime is Piunti's first album with his new band The Complicated Men. The Complicated Men are Jeff Hupp on bass, Ron Vensko on drums, and Kevin Darnall on keyboards. Ryan Allen (guitar, harmony vocals, percussion) and Chris Plum (harmony vocals, percussion, synthesizer) also turn up in guest starring roles.

While Piunti's voice and songwriting style are immediately recognizable, he sounds palpably energized on this ten-song long player. He has been such a picture of consistency and timeless pop craftsmanship over the years, and none of that changes here. But Downtime is definitely a little more of a rock band record and a little less of a singer/songwriter record. Vensko and Hupp form a dynamite rhythm section, and Darnall's keyboards work in perfect harmony with Piunti's melodic guitars. And far as the songs go, this is Piunti's strongest batch in years. "Upper Hand" is the kind of song you pray Piunti never strops writing. It comes on with a tuneful, pleasantly punchy verse and then explodes into a chorus that's pure pop magic. My god, what a hook! In what kind of crazy world is this song not a million-selling single? "Bright Light" is melody on top of melody on top of melody - a perfect marriage of a well-crafted song and a band clicking on every level. If recent albums have established Piunti as the king of "adult power pop", "Every High" demonstrates that he can wear the crown whenever he wants. Again, there are melodies for days. But just when you think this album is settling in the way you thought it would, it surprises in little ways. Songs like "Going Nowhere" and "Never Belonged To Me" really rock, and in between "All Over Again" is a truly exceptional ballad. "Contract", which clocks in at just over two minutes, is a fine example of the great time Piunti is having with his new band mates. These guys rock this one out like the heyday of indie/alternative never ended. You know you're a gifted songwriter when you have the luxury of sliding a song as good as the pre-album single "All This Time" in at track nine. When I first heard this song six months ago (which now seems like a lifetime ago!), I thought it was one of the finest songs Piunti had ever written. I still feel that way. And yet somehow it seems perfectly placed as this album's penultimate track.

You always know what you're getting with a Nick Piunti album: timeless songs with great hooks and clever lyrics influenced by every great era of guitar pop. You can't go wrong with any title in his catalog. But working with The Complicated Men, he's truly topped himself with Downtime. This is at once a classic Nick Piunti record and something a little different. Longtime producer Geoff Michael does his usual bang-up job of magnifying the beauty of Piunti's melodies. And in the case of this album's production, that meant highlighting the talents of The Complicated Men. I'm hoping this album is just the beginning of a long and fruitful partnership. Fingers crossed that the world affords us Nick Piunti & The Complicated Men at Budokan someday!