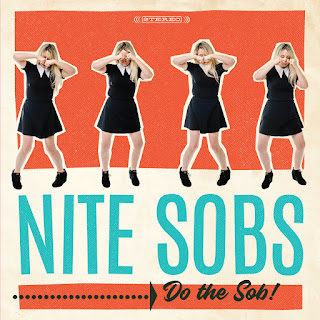 Who's ready for some really great pop? Nite Sobs are a new-ish band from Austin, Texas who have released what is sure to be one of the best albums of 2020. Do The Sob! is an absolute treat for anyone who loves melody-driven rock and roll that's jam-packed with harmonies. Nite Sobs, like many a power pop band, are throwbacks to a golden age of rock and roll. They write two-to-three minute pop songs about the ups and downs of love - timeless stuff both musically and lyrically. But while the Beatles are often ground zero for this sort of band, Nite Sobs' inspirations go back even further to doo wop, the Everly Brothers, and Buddy Holly. Rather than reinventing the wheel, they stick to a timeless style and execute it to perfection. The songs are well-crafted, and these guys can really sing! Those harmonies are legit. I love how warm-sounding this record is - like it could have actually come from the late '50s or early '60s. The band name is perfect because most of these songs are about heartbreak and regret. Yet this is the ultimate feelgood music. You could even gather your family members and re-create these songs a cappella! There's a nice variety here, with styles running the gamut from new wave pop ("Mixed Signals") to the British Invasion ("I'll Keep You Satisifed") to a pure old school '50s sound ("Vowelrie"). Remember the "oldiescore" branch of pop-punk? Nite Sobs are like the power pop version of that. I wanna join the fan club! Do The Sob! is available now in digital and CD formats from Beefcake Records. Vinyl coming soon!