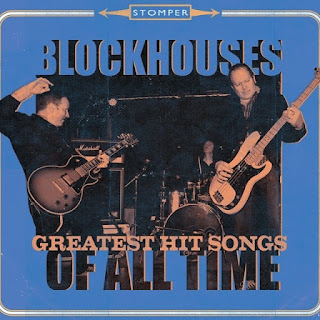 Essential album alert! It's hard to believe that four years have passed since I first reviewed Blockhouses - the New York City power pop rock n' roll trio featuring ex Figg Guy Lyons on guitar and vocals. The band's lineup has remained in tact with Chris Peifer (The Kowalskis) on bass and Jim Balga on drums. With three singles in the books, the band returned from a hiatus this year to complete its first full-length album. And so here it is, aptly titled Greatest Hit Songs of All Time. This album is a power pop enthusiast's dream - full of catchy, high energy tunes that just plain rock. Lyons authored several of my favorite Figgs songs on the Banda Macho and Couldn't Get High LPs, and the songs he writes for Blockhouses have a very similar appeal. If Greatest Hit Songs of All Time sounds like it could pass for a long-lost Figgs album, then it should come as no surprise that it was produced by none other than Pete Donnelly!

A couple things are apparent about Guy Lyons: 1) he's a highly underrated songwriter and 2) he sure knows how to surround himself with incredible musicians. Peifer and Balga make up the formidable rhythm section that really drives these songs. Sometimes "power trio" is just a euphemism, but I can't think of a more fitting way to describe Blockhouses. It's clear that these songs were written not just to sound good on record, but also to be fully rocked out on stage. And while the album title is obviously tongue-in-cheek, there's some real truth to it. This thing is packed with tracks that could have been A-sides to singles (a couple of them, in fact, actually were!). Opener "Love To Get You High" is something of a Blockhouses classic by now. If you wanted a textbook demonstration of how to put the power in the pop, this song is it. Punchy guitars? Check. Driving energy? Check. A chorus that will be stuck in your head from the first time you hear it? Check! In a similar vein, songs like "Be Free", "Always Have To Fall", and "Waste Our Time" are what all loud, catchy pop should aspire to be. Could "Last Love" be any more Figgs-like? And even when the band slows the pace a tad, the results are no less satisfying. "What You've Done" hits that later Replacements/solo Westerberg sweet spot, while the pure melody and sentiment of "A Night To Remember" really highlight Lyons's tremendous talent as a songwriter. To close it all out, "Tell Me You Miss Me" is a raunchy Stonesy rocker that ends the album on an even higher level of energy than it started with. I bet people go crazy for that one live!

It took a few years, but Greatest Hit Songs Of All-Time is every bit the knockout debut album I expected from Blockhouses. The songs from the singles sound better than ever, and the new material is every bit as strong. To me, the best power pop is the kind that sticks closest to the blueprint of good old rock n' roll. Blockhouses are the perfect case in point. They know it isn't necessary to reinvent the wheel. They're all about writing great tunes with memorable hooks and rocking the heck out of them. I can't imagine any regular reader of this blog not loving this album. Get it on compact disc from CD Baby. Click here for download and streaming options!

Thanks for this. Superb album!