Vista Blue - The Carols That We Sing 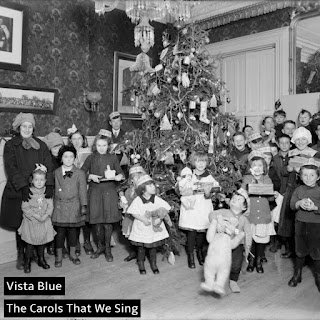 By now some of you must be getting pretty sick of me writing about Vista Blue! But quite a few of you are surely going the other way and wishing I would write about Vista Blue even more. This post is for those of you on the latter side - the ones who would be perfectly content if I wrote about Vista Blue every week and perhaps even made a televised event out of it ("Joining us tonight are Brian Wilson and Homer Bailey!"). And come on, is it really Christmas anymore without a Vista Blue Christmas record? This year's offering is called The Carols That We Sing, and it's not your typical selection of holiday standards. The two originals are both homages to notable Christmas movies. "I Made My Family Disappear" is a virtual plot summary of Home Alone, while "Silent Night, Deadly Night" is inspired by the film of the same name. What could be better than Christmas songs and Christmas movies? Songs about Christmas movies! I'm not sure how a song about Silent Night, Deadly Night manages to sound so warm and upbeat, but that's exactly what Vista Blue has pulled off here! Of the two covers, you are more likely to be familiar with "Merry Christmas, Baby" - a song off of the Beach Boys' 1964 Christmas album. "Santa", on the other hand, is a rather obscure doo-wop oldie by The Roomates. If you don't already know The Roomates' version, it's very much worth checking out. You might wonder why it's not an accepted classic of the Christmas song genre. I sure do! I absolutely love Vista Blue's arrangement of the song - which finds the band hitting its pop-punk/oldiescore sweet spot. Those harmonies are on point!

Now that Vista Blue has released four Christmas EPs, the time was certainly ripe for a compilation of all of the band's Christmas songs. Available soon from Radiant Radish Records, The Christmas Collection CD compiles 20 songs including one track recorded for a film and two unreleased acoustic demos. You can pre-order here or purchase the digital version from the Radiant Radish Bandcamp. Once again, Vista Blue does not disappoint with its annual holiday release. I will be cranking these songs daily for the next two-and-a-half weeks. Now all I really want for Christmas is for Bryce Harper to sign with the Phillies...