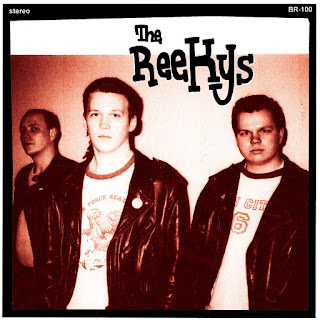 Now this was a wonderful, out-of-the-blue surprise! Formed in Munich way back in 1996, The Reekys were one of Europe's leading gangs of teenpunk Ramones disciples in the late '90s/early 2000s. They released two seven-inches (one a split with fellow Germans The Boonaraaas!!!) and were immortalized in song by The Highschool Rockers. In 2005, they recorded a full-length album that never saw the light of day...until now! For its 100th release, Bachelor Records' has finally issued this "lost" debut album from The Reekys. And given the current status of Ramonescore as a thriving genre of music, perhaps this was the perfect time for a Reekys LP to come out. As it should be, this album makes no attempt to stray from the Ramones blueprint of simple and stupid punk rock. 9 of 14 tracks clock in at under two minutes, with lyrics addressing the big issues like girls, wrestling, and being an idiot. This is Ramonescore by the book, and I must say it holds up well! Whether this release brings back fond beer-soaked memories of your youth or simply speaks to your love for fun three-chord punk rock, Bachelor Records has done us a great service in unearthing it. It's limited to 500 copies, so get one before they're all gone!