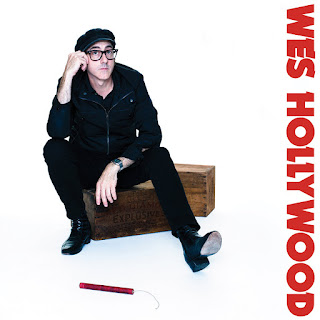 Let's not bury the lede here: Wes Hollywood describes his own music as "Ray Davies and Elvis Costello having a punch-up in the front row of a Cheap Trick concert". That could not be more accurate! So you can understand why I am a fan of his new album Dynamite. It really hits that spot where '60s British Invasion and '70s new wave pop intersect. Hollywood (Kingsize, tenniscourts) is a longtime fixture in the Chicago underground music scene, and he does give his largely British influences somewhat of a Midwestern power pop treatment. Nothing about Dynamite reinvents the wheel, but there's something very admirable about a guy who acknowledges his inspirations and just sets out to write really good pop songs. He's particularly adept at penning plaintive yet lovely melodies ("Nothing To See Here", "No One Loves You"). "When Sunday Roll Around" could not possibly be any more Kinks-like, yet I honestly don't mind. The Costello worship is very up-front right down to the look, so it's hardly a surprise that many of the album's better tracks are reminiscent of EC's "classic" (first three albums) period. Okay, so maybe this isn't quite The Jags. But then again, what is? I just have a soft spot for anything that reminds me of new wave and power pop circa 1978-80. And in the case of this particular record, I must say the style is carried off well. How many other songwriters out there are name-checking Bram Tchaikovsky as an influence?! Thanks to Dany Laj for turning me on to this record!