The Antidon'ts - We Reap What You Sow 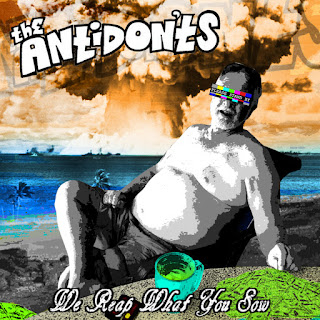 I had rave reviews for The Antidon'ts a couple years back, but I must say the Florida punk trio has really outdone itself with its new album We Reap What You Sow. Musically, this release is largely vintage Antidon'ts - raging like the best of '80s hardcore/skatepunk with a touch of surf. But lyrically, it's absolutely intense and a perfect summation of present-day youthful despair. Different bands have been inspired by our current state of affairs in many different ways, and in the case of The Antidon'ts that means going very, very dark. And while the bleak outlook of this album is a tough pill to swallow, you have to admire the band for really telling it like it is. The band for the most part avoids the obvious political statements (although "Keep That Shit Out Of Our Scene" is a scathing indictment of bigotry) and instead probes into our deeper malaise. These are songs about our inability to avoid the noise and manipulations of the media, about how both sides of the political spectrum are misinformed and overly reliant on the opinions of others, about the way people have become willing participants in their own oppression. While hardly the first band to comment on the falsity of the American dream, The Antidon'ts have done so here in a way that rings particularly true in 2018. And as dark as the album gets, the message is not so much "We're doomed!" as it is "We're doomed if we don't wake the fuck up!". When the songwriting turns personal on the powerful "Confessions Of A Nihilistic Alcoholic", there's similar light peering at the end of the tunnel. It's a dark tale, but one that ends with hope and positivity.

As impressed as I was by The Antidon'ts previously, I'm pretty blown away by how far they've come in just a couple of years. They clearly put a lot of thought and effort into writing these songs, and that shows in both the music and the lyrics. We Reap What You Sow finds the band more stylistically diverse than ever, and the conviction driving these songs is undeniable. This album is a perfect reminder that when it comes to using music to articulate meaningful ideas and inspire free thought, punk rock is as vital of a force as ever.