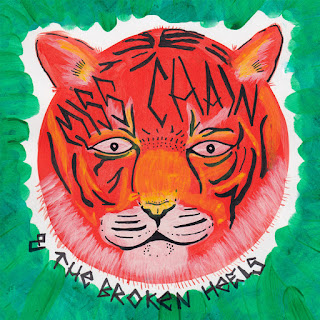 I can't think of a better way to end another year of reviews than with a post on my longtime favorites Miss Chain & The Broken Heels! It has been a really long time since we've heard from Italy's finest musical export. "Uh Uh" is the band's first release since 2013's fantastic LP The Dawn - and its first new single since 2012. I must say it does not disappoint. Essentially Miss Chain & The Broken Heels have evolved over many years from a great power pop band into a great pop band, period. Astrid's voice - so lovely and warm and expressive- has been served well by maturity. "Uh Uh" is upbeat, twangy pop with a knockout melody. It's likely to send you into a frenzy of head-bobbing or impromptu dancing. On the flip, "Standing the Night" slows the pace and mellows out the vibe. It's just so pretty, with standout harmonies and guitar work. Even with the band members taking some well-deserved time off after extensive touring for The Dawn, the magic is still there. I couldn't be happier with these two songs! Get the single from Bachelor Records, and let's cross our fingers for a new album in 2017!