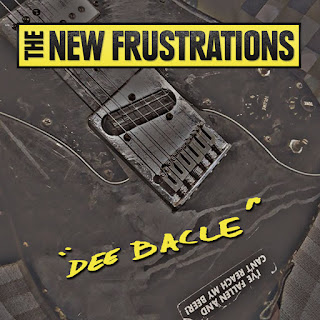 So if I had to list my current favorite bands, The New Frustrations would be way up there. The group formed a decade ago when ex johnnies Tim, Scag (RIP), and Brian joined forces with Rick and Tom and rechristened themselves The New Frustrations. I was a huge of The johnnies, and I quickly found that I loved The New Frustrations just as much. In 2006, the band recorded one of the best demos I've ever heard. A debut EP called Power Pop Rocks arrived a year later - although I had fallen off the face of the Earth at that point and was not around to review it. So now, for the first time in ten years, I have the pleasure of reviewing new material from The New Frustrations. Christmas has come early!

The new EP Dee Bacle, released just last week, sounds like it could have come out nine days after Power Pop Rocks as opposed to nine years. The New Frustrations haven't lost the plot at all! They still bring that classic mix of power pop, '70s punk, and straight-up rock n' roll. And while Scag is gone, his presence is still felt through the inclusion of his song "Too Scared To Kiss You". The band hooked me off the bat with "Radio Generation" - a song that celebrates a time when they still played great music on the radio (and laments what a shit show commercial radio has become). Having come of age listening to the radio and buying records in the late '70s and early '80s, I'm always a total sucker for songs like this. It's a perfect mission statement to open the record, and that hook is fittingly radio-worthy. "Right As Rain" follows, and it sounds like a classic Replacements song. You'd think that that sort of tune would be easy to write, but I've not heard it done this well in a long time. Is this the band's best song yet? Maybe! "Not Anymore" is something we haven't heard previously from The New Frustrations but suits these guys so well: kick-in-the-ass rock n' roll with hooks. Reminds me of The johnnies (Duh!). And to close the EP, the band honors Scag beautifully by absolutely crushing "Too Scared To Kiss You". This track is everything that a great pop/punk love song ought to be, and the lyrics are so spot-on that they leave me misty-eyed every time. It's always nice to come across a song that makes me wanna jump out of my chair and pump my fist while I sing along loudly.

I really feel that within the power pop by way of classic punk realm of music, The New Frustrations are one of the very best bands out there. If you're a regular follower of this blog and haven't taken advantage of free downloads of the band's first demo and 7" over at Bandcamp, you are seriously missing out! And Dee Bacle, available on CD or digital EP for just four bucks, is worth every penny and then some. Given the crap year that 2016 has been, 2017 can make amends by granting world domination to The New Frustrations.