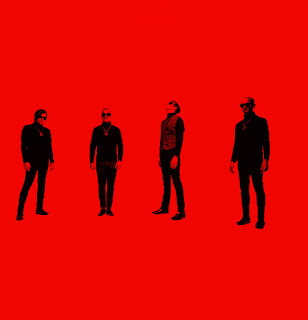 So the immensely-anticipated debut album from Drakulas has arrived, and it leaves no doubt as to why all of that anticipation was so immense! Drakulas are a garage/punk super group featuring the likes of Mike Wiebe and Rob Marchant from Riverboat Gamblers and Zach Blair from Rise Against. The band's debut album Raw Wave is out on Dirtnap Records, and it's another stellar addition the "Texas branch" of this venerable label.

While there's no doubt that fans of Marked Men, High Tension Wires, etc. will go completely nuts for Raw Wave, this is truly a release unlike anything else Dirtnap has ever issued. The sound is new wave meets garage punk meets power pop meets post-punk, and lyrically the songs come together to create what is essentially a work of high concept fiction. The story is set in an imaginary metropolis of the recent past that brings to mind the seedy 1970s Times Square - a domain of pimps, prostitutes, pornographers, gangs, street preachers, and addicts. Each song advances the narrative from the point of view of a different character. The title of the album refers to a period of time when the arrival of new analog technology loomed large in this world. Yet even with all of this literary ambition, the music never gets bogged down in pretense or grandeur. This is some seriously catchy stuff! Even if you weren't paying attention enough to realize that Raw Wave is a concept album, you could still delight in the record's pulse-raising mix of late '70s punk/new wave and more modern variations of garage and punk. The feel of the songs varies from the punchy, almost Dickies-ish rush of "Getting Out" to the futuristic menace of "BetaMax" to the dizzying frenzy of "Headphones/Slit Throats" to the angular oddness of "VHS" to the pure poppy punk of "Stepping On Glass". Drakulas really succeed at drawing from a number of stylistic influences and putting it all together to create someone that feels genuinely fresh. This is a rare case where a punk band manages to do something "different" without straying from the most satisfying elements of the genre. You can sit down with Raw Wave and absorb yourself in the story, or you could enjoy any of these tracks in complete isolation from the larger work. Either way, this is the best thing that Dirtnap has released in quite a while. One of the year's best!