The return of Hakan! 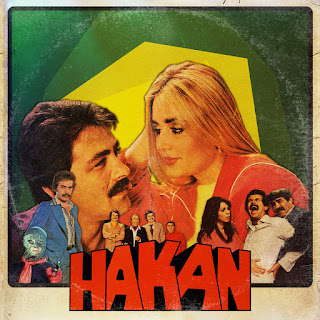 Hakan was by far my most pleasant surprise of last year - coming seemingly out of nowhere to unleash an incredible debut album that hearkened back to the mid-2000s heyday of tuneful garage punk. The Italian trio's obsessions with Turkish pop culture certainly made for great shtick, and more importantly the group hit that sweet spot overlapping garage punk and power pop like no one since The Kidnappers and Marked Men. The album made my top ten list for 2016, and I'd probably place it even higher if I re-ordered the rankings today. I had no idea that a follow-up was already in the works, but much to my delight Hakan II has just turned up on One Chord Wonder Records out of Italy and Drunken Sailor Records out of the U.K. And while it's rare in life that the sequel is as good as the original, Hakan II proves to be one of those exceptions!

The headline for Hakan II is that the band brought in Jeff Burke (Radioactivity, Marked Men) to produce the album. It must have been a huge thrill for the group to work with a producer who so completely "gets" its music, and the results are predictably first-rate. Burke did a wonderful job of contributing his expertise while still letting Hakan be Hakan. Like any good sequel, Hakan II doesn't stray too far from what worked so well the first time. 11 of 13 tracks come in under two minutes, and again the band excels at writing hard-driving, catchy-as-hell pop/punk/garage tunes. What impresses me is that this batch of songs is just as strong as the last one - and decidedly more diverse. "Hakan Baby" will have you bobbing your head from the very first note, and ripping tracks like "Dental Love" and "I Drank Way Too Much Krupnik" are highly reminiscent of the best songs from the first album. But rather than just make the same record all over again, Hakan has elected to mix in a few songs with a slightly different feel. "Dog" is darker and fiercer-sounding than anything Hakan has done before, and it's one of the album's highlights. "You Can Cry" is a genuinely successful attempt at a pure pop song. "Six Feet Underground" is essentially a punked-up folk song. And the atmospheric, mid-paced "Spiders" is almost certainly a tip of the cap to Mark Ryan's Mind Spiders.

Hakan really pulled out all of the stops in averting the sophomore jinx - enlisting the highly-sought services of Burke and mastering wizard Daniel Husayn. But ultimately what makes Hakan II such a triumph is the strength of the material. One great album could have been a fluke. Two great albums proves once and for all that Hakan is one of the best bands out there. I can't think of many bands that better represent everything I love in music. Very soon you'll be seeing this album in my year-end top ten!

Great review. This album is amazing.