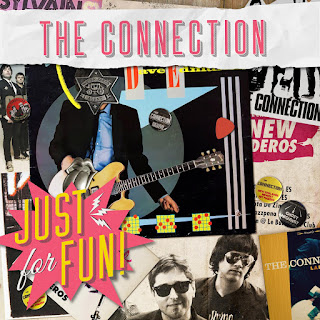 It is with great pleasure that I now premiere a brand new track from the best rock n' roll band going: the almighty Connection! Next week the band will be releasing an all-covers album titled Just For Fun on its Bandcamp page, with CD (on Rum Bar Records) and LP releases to follow in early 2017. As the title suggests, Brad and Geoff decided it would great fun to go into the studio and record covers of a bunch of songs that they love. The resulting album is an absolute blast! Among the tunes covered are the Bob Seger ripper "Get Out Of Denver", Sylvain Sylvain's "Teenage News", Cheap Trick's "Southern Girls", and the greatest rock n' roll song ever written - The Dictators' "Stay With Me" (which premiered yesterday over at New Noise Magazine). B-Face (The Queers, Groovie Ghoulies) guest stars on bass on several tracks, and legendary pop-punk producer Mass Giorgini mastered the album. Just For Fun was produced by Brad & Geoff and mixed by Mike Kennerty (The All-American Rejects). I'll post a full review after the album releases, but right now you can check out The Connection's smoking hot rendition of the Dave Edmunds favorite "Other Guys Girls". Turn it up and enjoy!