Los Pepes for everyone! 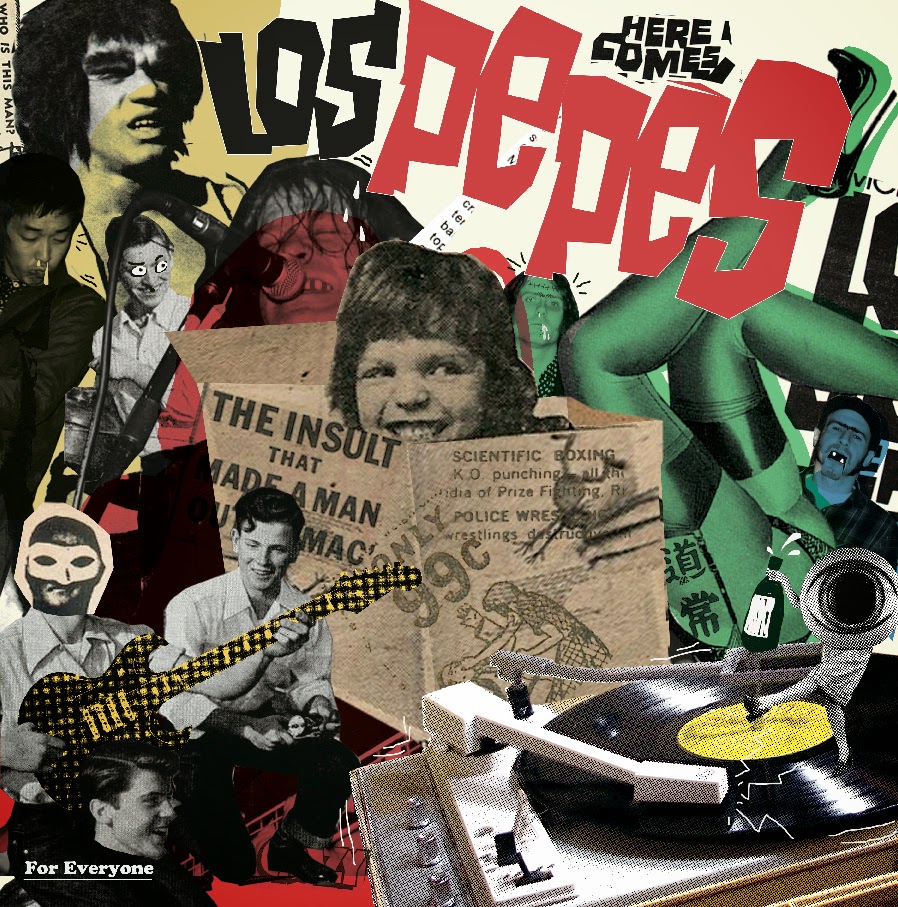 Well! Just when I thought I'd finalized my top albums of the year list, Los Pepes have sent me scurrying back to the drawing board! It seems I have some serious re-arranging to do! Having already wowed me with the "loudest power pop on earth" stylings of their prior EPs, these Londoners have really honed their musical vision on a brilliant debut album that had me going nuts from the very first note. At this point, Los Pepes have settled in to a classic '70s pop/punk sound a la Buzzcocks, Boys, and Undertones. Los Pepes For Everyone - out now on Germany's Wanda Records - executes the style to perfection. Needless to say, I'm quite pleased!

If I can pinpoint something that separates Los Pepes from a whole lot of similar bands, it's that their songwriting seems directly informed by '60s pop and girl groups. They look back not just to the Ramones, Boys, etc. but also to the timeless sounds that inspired those bands. In that respect, Los Pepes sound less like a modern answer to all those late '70s pop/punk greats and more like a band that could have existed alongside of them. "Punk rock you can dance to" is the band's credo, and that's a campaign I can totally get behind! Los Pepes For Everyone combines the crackling energy and primal simplicity of punk with a joyful rush of melodies and harmonies that ought to have you whistling all day and dancing into the night. Whether you consider this power pop on amphetamines or bubblegum punk rock, you can't deny that it's super fun and immensely infectious. And I love the way this band manages to combine such sweet melodies with a totally ballsy musical delivery. While not quite "lo-fi", the recording is raw enough that it doesn't neuter the punchy guitars and heart-racing drum work that propel the band's attack. And while pop/punk music often falls short because it's too much of one and not enough of the other, Los Pepes have found just the right blend.

My first exposure to Los Pepes For Everyone was the opening number "All I Can Do". I listened to it a couple times and literally could not stop singing it the rest of the day! I figured it had to be "the hit" - until I went back to the album and discovered that all the songs are hits! I'm impressed not just by Los Pepes' ability to deliver consistent quality on this 12-song LP but also by the sheer number of songs that could have been standout singles. And amazingly, only two of these songs have appeared on previous EPs. This is a debut album that sounds like a greatest hits collection - and I would not be surprised if that was the band's intention from the start! From the bubbly melodies of "Alone In The City" to the bittersweet crunch of "This Love's War" to the rambunctious fun of "Guilty Pleasures", the hooks on this record are numerous and massive. And while the Buzzcocks and Boys have both delivered very good albums this year, I don't think either band is still writing songs as good as "I Don't Need Anyone" or "I Won't Fall In Love".

The title Los Pepes For Everyone pretty much says it all. Dom Daley, one of my favorite music reviewers, calls it "life affirming rock n' roll". And that really hits the nail on the head. If you're looking for an album that's going to put you in a swell mood and allow you to escape your worries for a good half hour, this is it. I imagine that Los Pepes shows are high-spirited affairs full of much dancing and singing along. And that same spirit comes across on record. There will always be a place in the punk world for bands that are full of rage or strong opinions on political issues. But sometimes, you know, I just need to hear some music that's fun. Without a doubt, Los Pepes have guaranteed themselves a spot in my year-end top three. Determining exactly where this album falls within that top three could require some very difficult decisions on my part. What a fine problem to have!