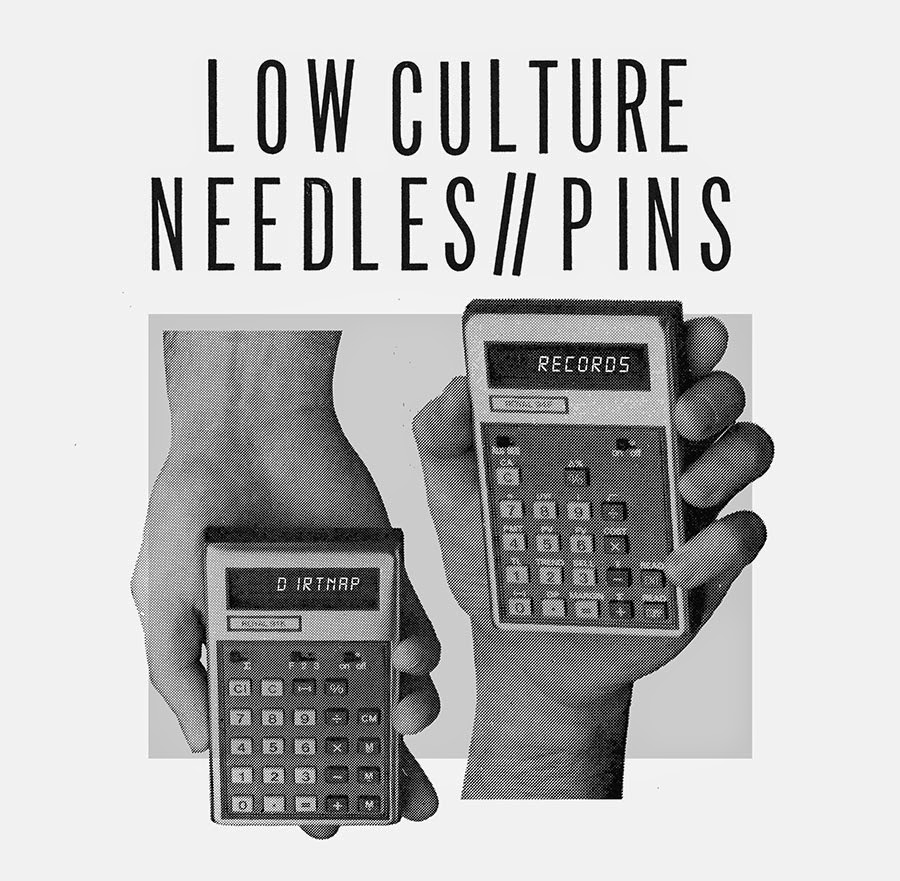 In today's underground punk world, there aren't as many split releases as there used to be. But I still enjoy a good split from time to time, and Dirtnap Records is one label that really seems to "get" this format. If there's a down side to splits, it's that sometimes the one band is awesome while the other completely blows. Or sometimes bands will be paired together when they have absolutely nothing in common in a musical sense. So I really appreciate the thought that Ken puts into his split projects - and his history of winning pairings such as Something Fierce/Occult Detective Club and Mean Jeans/Big Eyes. Dirtnap doesn't get involved with splits very often. But when it does, it gets it right! A case in point is a brand-new one featuring Low Culture and Needles//Pins. Low Culture - with its poppy garage sound and direct Marked Men connection - is pretty much the quintessential Dirtnap band. And when it comes to Needles//Pins, a lot of us have been wondering why in the heck they weren't already on the Dirtnap roster!

I'll be honest - I had a preconceived notion that I was going to like the Needles//Pins side of this split way better than the Low Culture side. That's no knock on Low Culture - just a reflection on Needles//Pins being one of my favorite bands. But, you know, if I had to pick a "winner" of this split, I might give it to Low Culture by a hair. "Reservations" and "Don't Tell Me" are the best songs I've heard to date from this band. To me, these tracks are a perfect example of how a band can keep a lo-fi garage spirit in its music even when it records in a professional studio. With Joe and Chris so well-known for their work in Marked Men and Shang-A-Lang, it's no surprise that Low Culture combines qualities of both bands. That was true of the band's LP, but it's far more noticeable here with the better production. This is definitely a poppier sound than I was expecting - but in an adventurously off-kilter way. "Reservations" in particular indulges in a bit of what you might call "slacker jamming". I'm reminded a little of the classic days of alternative rock - when loose, fuzzy pop ruled college radio. I love the energy, and those melodies have really been working their way into my brain. If you fondly recall a time when "indie" rock didn't suck or are into newer bands like Tenement, I think you will dig. Now I'm stoked for the next album!

Both of Needles//Pins' contributions to this split are from the same sessions that produced the terrific Shamebirds LP. In case that album didn't leave you with your fill of bad breakups, broken hearts, and toxic relationships, "Hateful" picks right up where Shamebirds left off. I can't get over how good Adam is at writing this type of song. For his sake, I hope he doesn't write entirely from personal experience. But considering the brutal honesty and sheer intensity of his lyrics, it seems unlikely that he's just making this shit up! "Bored" is a song that people will relate to immediately - an anthem for all of us who know that one person who just needs to shut the hell up. What I love about Needles//Pins is that their songs speak to the universal human experience. But when it comes to the things that are genre specific about their music, there's no questioning why they're so beloved by powerpop/garage/punk fans. The lead guitar in "Hateful" is just so catchy, and "Bored" delivers a hook to die for. Sometimes the "leftovers" from bands' album sessions are best left unheard, but both of these songs are quite good. And now all feels right in the world since Needles//Pins and Dirtnap have finally worked together. I would say that this is not the last time you'll hear this band on this label.

Did I say that Low Culture "won" this split? I lied. It's a tie. And when a split is done right, that's just how it should be.