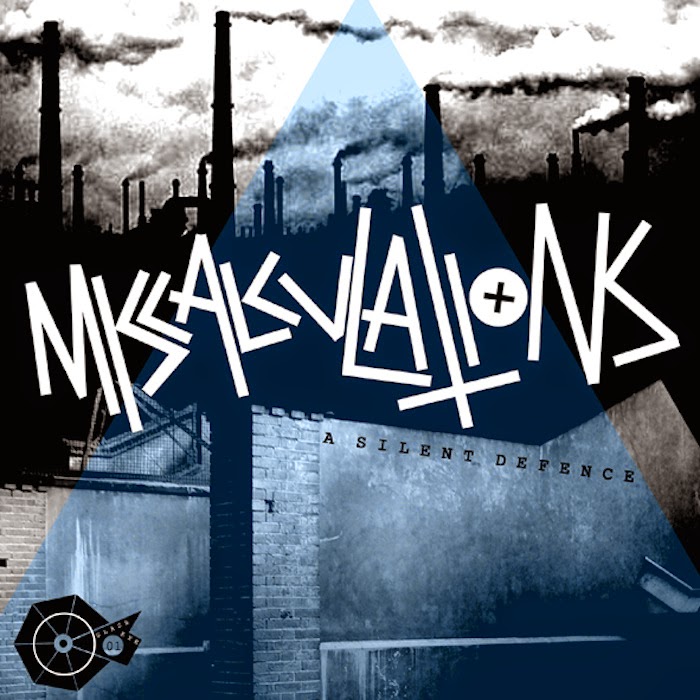 The phenomenal English duo Miscalculations blew my mind with their 2013 debut album - to such a degree that I'm writing about this band for the third time in less than a year! Today, the occasion is the release of a new single on No Front Teeth and the band's own Glass Eye Records - a limited item that's sure to sell out fast! Heck, for all I know it might already be sold out! The A-side, "A Silent Defence", is actually from the band's LP. If you're unfamiliar with Miscalculations or haven't heard the album, think cold, angular post-punk with a sharp '77 U.K. punk edge. If you already own the LP, there are two reasons why you'd desire this single: because you're a super fan and want to own every last item this band releases (understandable!) or because the B-side alone warrants the purchase price.

So for a lot of people, then, the brilliant "Clairvoyant Stare" is the featured attraction of this release. If you don't want to cough up £6 for only one new song, I would at least recommend a digital download of the song you haven't heard. If this track is a sign of what's to come from Marco and Shaun, then Miscalculations ' forthcoming second album is not going to disappoint! "Clairvoyant Stare" has a touch of synth to it, but it's mostly guitar/bass driven and very much on the icy side of late '70s punk/new wave. I don't want to give away the concept/story, but I'll just say that the lyrics are so creepy that they actually bother me. I don't dare listen to this song within four hours of bedtime! Can you imagine the dreams I'd have? Again I hear hints of Wire, Warsaw/Joy Division, and even Gary Numan. If I hear anything that might distinguish this track from the band's previous offerings, it would be that it's a little closer to the new wave side of the punk/new wave continuum. But that's not necessarily a bad thing (yes, I know - a surprising statement given my personal preferences!). The recordings of Miscalculations are the musical equivalent of a bleak, futuristic art film that I cannot stop watching. I sense that the new album (due out early 2015) is going to be a little different. And when you're talking about a band with this kind of talent and vision, different is usually good. I'm guessing that "Clairvoyant Stare" will be on the new album, but why wait until next year to hear it? We could all be dead by then.