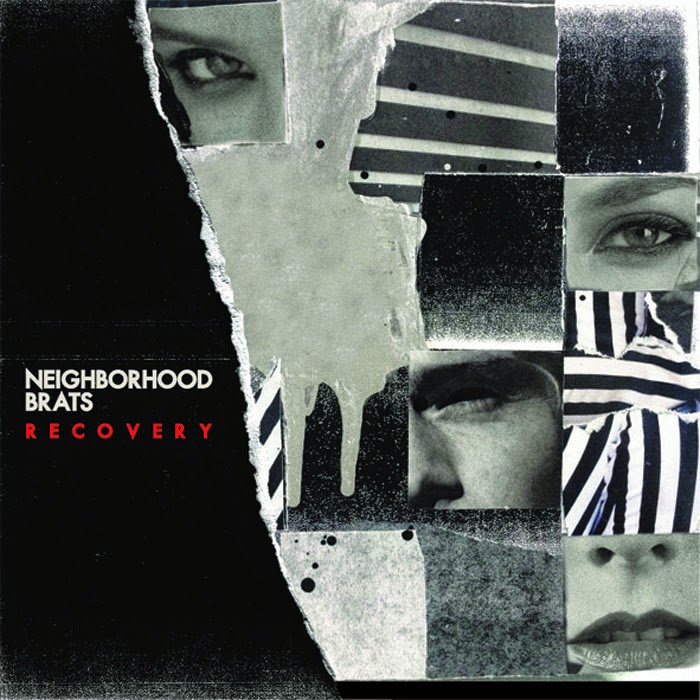 I have reviewed Neighborhood Brats on four occasions previously - and the last time I ended with the hope that 2014 would finally bring us a proper album from this fantastic L.A. band. Well, sometimes wishes come true! Recovery is the long awaited debut long player from an outfit that quite a few people are calling the best punk rock band out there. I would, on the strength of this album, maintain that Neighborhood Brats are indeed in the thick of the "best punk band on the planet" conversation. Recovery, arriving with considerable expectations, does not disappoint!

What I like about Recovery is that it pushes Neighborhood Brats' sound forward without straying from the band's mission to play straight-up, undiluted punk rock in the style of the late '70s and early '80s. Jenny, George, and outstanding new rhythm players Mike Shelbourn (drums) & Dan Graziano (bass) don't mess much with a successful recipe. Seven of 12 tracks clock in at under two minutes, and no song exceeds three minutes. The band for the most part continues to play aggressive and powerful punk rock, and Jenny remains a dynamic force on vocals. But compared to the band I first heard three years ago, this incarnation of Neighborhood Brats sounds far less like a hardcore band - now embracing more of a classic California beach punk sound replete with darker sensibilities and surf-influenced guitar work. Energized by its new-and-improved lineup, the band sounds ferocious and downright inspired on this crackling debut album.

Recovery hits the ground running with "Year Of The Brat" - the kind of mission statement/anthem that most punk bands spend their entire careers trying to write. I've never seen Neighborhood Brats live, but surely this is a song that sends crowds into a frenzy. It's got a chorus you just have to sing along with - and a great message of leaving the past behind, taking control of your life, and just going out and kicking ass. At some level, everyone can relate to that. If you're not turning up the volume and wildly shaking your fist by the end of the song, you may not be human! Seizing the momentum of such a fast start, the band proceeds to rip into high-speed burners like "Boys For 20 Years" and "50 Shades Of Fuck You". Neighborhood Brats have built their brand on fast & furious songs like these - and at this point they've truly perfected the formula. The production really plays up the power of the band's attack - accentuating George's scorching riffs and a veritable neutron bomb of a rhythm section. On vocals, Jenny excels at delivering acidic lyrics with full-on fury. She's especially compelling when the subject matter is intensely personal ("One Wasted Year"). And even at her angriest, she finds clever ways to articulate her rage (the chorus to "50 Shades Of Fuck You" is so priceless that I won't dare spoil it for you).

Recovery, while hardly a complete break from Neighborhood Brats' previous output, does show signs of musical growth. Right around its mid-point, it begins to surprise in entirely pleasant ways. "Suburbia" slows the pace a tad and captures an Adolescents/D.I. style old school punk sound, while "Escape The City" is a surf punk instrumental that would make Night Birds envious. And having loved the band's recent cover of The Go-Go's "Lust To Love", I get a similar vibe from the dark beach-pop of "Painted and Gutted". By the time the band brings it home with a trio of sub two-minute blazers ("The Pharmacy Is Closer Than The Liquor Store" has to be the best song title of the year!), I'm left with the satisfaction of having experienced a truly great punk rock album. It delivers so much of what you were expecting - and does it well. Yet the things about it that were somewhat unexpected do not seem out of place. Recovery captures that signature Neighborhood Brats sound without sounding like a copy of the band's earlier releases. The songwriting and production are the best of the group's career, and all in all this is every bit the amazing record I was hoping for. I'd put it right up there with a lot of the classic albums that surely inspired it. I'm pretty sure, in another 20 years, that more than a few bands will be trying to emulate "that George Rager guitar sound."