Third, but not least! 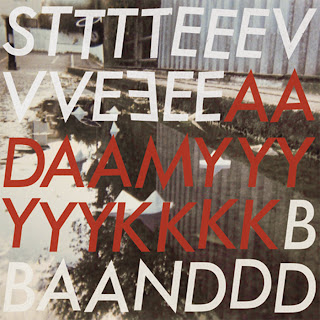 So the third Steve Adamyk Band album sounds quite a bit like the second, and I couldn't be happier about that! There's often a Catch-22 type situation with all these punk/powerpop/garage bands. If you stick to the formula, you get slagged for making the same record over and over. If you change your sound, people will say that they liked your old stuff way better. What's a band to do? I think Steve Adamyk has done a damn good job of "evolving" his music without switching up the recipe. New album Third holds proudly to the '70s pop/punk playbook, but there's no way I can deny that it's an even better record than last year's terrific Forever Won't Wait. Perhaps this time it's a little more punk and a little less powerpop, but the difference is very subtle. If you're this good at what you do, why mess with a winning formula?

Even with a re-vamped rhythm section, Steve and the gang continue their tight execution of dizzying and utterly infectious poppy punk rock. Seven of 12 songs fail to cross the two-minute barrier, and the frenetic pace by no means obscures all those ultra-catchy melodies. For me, what pushes this record slightly ahead of the last two is that it sounds both a little edgier and better produced. And the guitar hooks, such a staple of this style of music, are absolutely hot! If you're not bobbin' your head and tappin' your feet within the first 15 seconds of "Not A Witness", you may be clinically dead.

Given the great number of truly excellent bands currently doing this style of music, it would be very easy to take Third for granted. But that would be a huge mistake. I cannot emphasize enough what a tremendous record this is. It very much deserves a place on your album shelf alongside your Dickies and Buzzcocks titles. In my book, it can't possibly be a bad thing that my favorite sub-genre of music is flourishing. This is a really great time to be a fan of the punk/powerpop stuff. It's not just that a lot of bands are doing this type of music, but also that they're all doing it so well. And is it just me, or does Ottawa totally have it going on right now? White Wires, Mother's Children, Steve Adamyk Band? And how about those Sens?! Looks like they're playoff bound! Put another one into the win column for Dirtnap.