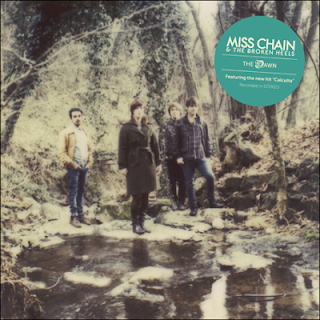 So back in December, I promised that early 2013 would bring a great new album from Miss Chain & the Broken Heels. And here it is! You had to know I wasn't going to steer you wrong! Given that this is already the third time I've written about this band for F & L, it's no secret that I'm a huge fan. So are at least eight of my Facebook friends. 2010's On a Bittersweet Ride is one of my favorite albums of the last several years, and these esteemed Italians were not going to have an easy time topping it. But The Dawn, out now on the illustrious Bachelor Records, demonstrates that Miss Chain and company were completely up to the task. It's by far the band's best record yet. And perhaps more gratifyingly, it proves that "serious" music can still be great fun to listen to.

As always, Astrid "Miss Chain" Dante shines on the strength of her lovely voice and amazing songs (co-written with guitarist Disaster Silva). The band's repertoire has expanded dramatically, but no one will deny that they've got the talent to tackle any style of music they want. Broadly speaking, this record is every bit as "pop" as previous efforts. It's just that the band has stretched beyond its garage/power pop roots and found a sound that's all its own - a surprisingly contemporary melding of Beatlesque melodies, '60s French-pop radiance, old style country/western twang, fluid classic alt-rock guitars, and dreamy psychedelic soundscapes. Conceptually, this is an album about a girl becoming a woman. The lyrics are full of introspection on all facets of this coming-of-age experience. Echoing real life, the album is neither "dark" nor "bright" but rather quite a bit of both. Recorded over a two-week period at T.U.P. Studio in Brescia with producer Pierluigi Ballarin, The Dawn is sophisticated and meticulously crafted - yet thoroughly enjoyable to the very end.

While Miss Chain & the Broken Heels started out as kind of a solo project, they've become a band in the truest sense. Who doesn't love the bang-on rhythm section of the Barcella brothers (also of Nikki Corvette & The Romeos)? And with his brilliant work on lead guitar, Disaster Silva has become a true co-star of this group. I can't help hearing a Chrissie Hynde/James Honeyman-Scott type chemistry between lead singer and guitarist. And some of the songs, like "There's A Ghost" and "Don't Look Back", actually remind me a little of early Pretenders. Now in her later 20s, Miss Chain does sport a noticeably "matured" voice - which really enhances the emotional power of a lot of these songs. Tracks like the Western-styled "Calcutta" have a haunting vibe to them, while the spooky "It's Gone" could almost pass for a Terrible Feelings song. In the completely opposite direction, "Let Us Shine" is pure simple beauty. Then there's the upbeat "Little Boy", which will please old fans and win over new ones. And like many of my favorite albums, The Dawn is bookended by its two finest songs - the punchy pop gem "The Dawn Is Me" and the powerfully reflective "Rainbow".

If you go back and listen to all of Miss Chain & the Broken Heels' previous recordings and then play The Dawn, you may be staggered by the progression. Is this really the same band that made "Common Shell"? But what I like best is that this kind of growth has been achieved without the band turning away from the things that made it so appealing in the first place. Miss Chain and Disaster Silva have by no means abandoned their pursuit of the perfect pop song, and their considerable talents have only grown stronger over the years. They manage to draw from the past yet still make music that sounds current and distinctly their own. The Dawn's warm production and '60s influenced melodies are throwbacks to so many beloved rock records of a bygone era. Yet it doesn't feel "retro" or "old-fashioned" in the least. This is very much a band for now - hitting its stride with confidence and breaking free of stylistic pigeonholes. I can't say I'm surprised that they made an album this good, but I sure am pleased!