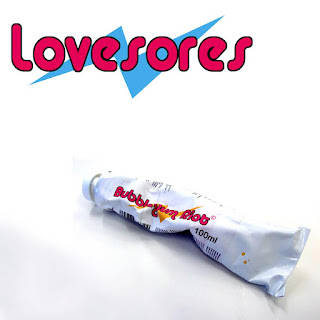 I'm just gonna come out and say it: the new Lovesores 10" ranks up there with any record that Scott "Deluxe" Drake and Jeff Fieldhouse have ever played on. I know: that's some mighty big talk considering that The Humpers were one of the greatest bands of their era or any other. But as they say, the proof is in the pudding. Listen for yourself if you don't believe me!

Out now on Rapid Pulse Records, Bubblegum Riot is vintage Drake/Fieldhouse flamethrower punk rock n' roll. And it freaking kills! If you thought that a quarter century in rock n' roll would have mellowed Scott Drake, you thought wrong! He's as full of fire and fury as ever - as if he's been guzzling whiskey straight from the fountain of youth. And let's face it: nobody plays punk rock n' roll guitar like Jeff Fieldhouse. He's like Chuck Berry, Johnny Thunders, and Cheetah Chrome all rolled into one bad mofo! By no means are Drake and Fieldhouse trying to sound like The Humpers. This is a new band, not a franchise reboot. But when these guys put the pedal to the metal and blast the rock n' roll, you know you're getting the goods. If you liked The Humpers, you're gonna love the Lovesores!

With Boz Bennes and Adam Kattau (of Fast Takers) and Alex Fast (of LSD & D) rounding out a red-hot lineup, the Lovesores are truly a force to be reckoned with. They really do fill a void that's been glaring since The Humpers called it a day. The moment "Bubblegum Riot" kicks in, you're immediately transported back to the mid '90s by way of 1977. It's pure energy and steamroller power right out of the gates, and the guitars are on fire! And Drake pours on the vocal piss and vinegar like no one else. "Pull up your pants, girl, you're attracting geese!" has got to be the best line of the year. The EP's six tracks really mix things up nicely, with full-throttle scorchers like "Flamethrower Chic" and "82nd Avenue Breakdown" blending awesomely with the '50s flavored title cut and the anthemic closer "Theme to the Lovesores". Last summer's debut single "Fast Friends" really got this band off on the right foot, but clearly they've taken it to another level in a hurry. I'll put songs like "Her Majesty's Ass" and "Theme to the Lovesores" up there with the truly classic songs of the Humpers' heyday. And having heard so many bands of recent years attempt this style of music to varying degrees of success, it's a thrill to once again hear it done to perfection. How many times can I repeat the phrase "rock n' roll" in one record review? I think you all get the point. You need this record. Get it from Underground Medicine!