In love with L.A. Drugz! 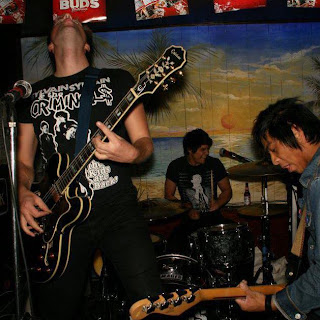 If you know me, and you know L.A. Drugz, I'm sure you could have predicted that I was going to go bananas for this band. Hell, you probably wonder what took me so long! This is definitely the quintessential "Rutledge band": super poppy punk with plenty of '77 oomph behind it. The lineup is star-studded, featuring Justin from the Clorox Girls, James and Johnny from Images, and Cezar from Bad Machine. And based on the tracks the band has shared on-line, their forthcoming LP is gonna be a must-have!

"Outside Place" (video below) seems to be "the hit". It's a punchy gob of catchiness in that cozy Buzzcocks/Ramones wheelhouse. The formula is nothing new, but you can hardly object when it's done this well. If you loved Marked Men, FM Knives, and (duh!) Clorox Girls, you'll be as crazy for this song as I am. And that's pretty crazy. "Vampire", with its no-frills production and sublime guitar hooks, has kind of a Spiral Scratch feel to it. Nothing wrong with that! And I'd say my favorite L.A. Drugz song so far is "Marina", which veers off the '77 punk course in favor of a classic Southern California power pop sound. Talk about catchy! This song's been in my head since I first heard it, and it just won't leave. Not that I want it to anyway!

Admittedly it's a small sample size, but what we've gotten from L.A. Drugz so far has been pure gold. Sometimes these "super" groups are total letdowns. This one, however, has all the markings of greatness. I would not be shocked if this were my favorite band by year's end. Stay tuned to Hovercraft Records for the skinny on their LP!