The Lovesores make a record! 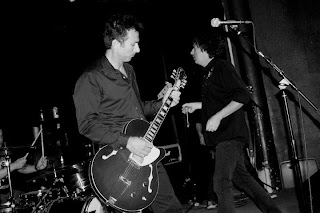 Featuring the two founding members of perhaps the greatest punk rock n' roll band this world has ever known, Portland's Lovesores were surely expected to wow us off the bat. And they have. When you've got Scott "Deluxe" Drake on vocals and the man Jeff Fieldhouse on guitar, anything outside of a Humpers style sound would just seem wrong. No worries - Scott, Jeff, and friends haven't strayed from the formula one bit! As the devil intended, The Lovesores play boozy, sweat-drenched rock and roll. They aspire to nothing more or nothing less. On their debut single "Fast Friends", they kick up a hellfire racket of trashed-out '70s punk by way of Chuck Berry. If the masses had any taste, millions of people would have lined up outside of record shops last week to score a copy. I mean, come on. If you like this kind of music (which you clearly do if you're reading my blog!), it just doesn't get any better than this. It's Scott motherfucking Drake! The man's not getting older - he's getting better! And he's got one hell of a band backing him these days. With Boz Bennes and Adam Kattau (of Fast Takers) and Alex Fast (of LSD & D) on board, I'd say this lineup could go toe-to-toe with the mighty Humpers in their prime. This style of music, in the hands of lesser practitioners, can come off as cheeseball cliche. But The Lovesores are what you'd call the gold standard of this genre. "Fast Friends", with its red-hot leads and full-bore degenerate swagger, will have you feeling like it's 1995 all over again. If it doesn't stir your soul, you're a closet Nickelback fan. LP coming out on Devil's Jukebox Records!

Thank's for the review Lord Rutledge, I'm a fan of THE HUMPERS, and i didn't Know THE LOVESORES. Many greetings from Spain !!!!!!