Return To The Nowhere Zone 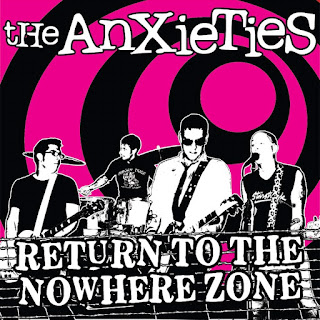 It’s an idea that a number of bands have tried before: re-record a bunch of old songs and make a “new” album. So why does the concept so rarely work? Perhaps because in a lot of instances, the whole exercise seems pointless. And far too often, the new versions of the songs are nowhere near as good as the originals (D.I.’s Caseyology, anyone?). But in the case of The Anxieties, it all makes perfect sense. They always seemed to me like a band that had only scratched the surface of their potential. You could tell what kind of music they were trying to make, but they weren’t 100 percent there yet. In the ensuing years, they’ve really figured out how to get the sound they want in the laboratory, I mean, studio. And with all due respect to past members, their current lineup is surely their best yet. On top of that, after a few years you really get a sense of which songs are worth re-recording and which ones aren’t. It all adds up to Return to the Nowhere Zone, far and away the best thing the Anxieties have ever released. I’m telling you, man: the thing flat-out kills!

Return to the Nowhere Zone is a frenetic delight. It comes off like an apocalyptic mash-up of early ‘80s Southern Californian melodic hardcore, late ‘90s Rip Off Records trash, and a Red Bull fueled all-night sci-fi and horror movie marathon. If not quite as dark as Sharp Objects or as unhinged as the Night Birds, The Anxieties are very much in the same vein and not lacking in social commentary of their own. In fact, it’s tempting to look at these songs and view the album as some kind of dire critique of the high strangeness that is our world in the year 2012. But keep in mind that a lot of these tunes were written like five or six years ago! With fully realized production and a tighter, speedier attack, The Anxieties really break out on this release and establish themselves as one of the top punk bands out there. Songs rarely exceed the two-minute barrier, and even at its darkest this album is fast-paced and fun. Von Rocket’s spastic vocals and humorous, socially aware lyrics have always been on point. Here they resonate like never before, buoyed by a Zero Boys meets Adolescents old school blitzkrieg and a heavy dose of surf guitar. Check out “Nowhere Zone” or “Do The Suicide” or “(The) De-Evolution (Will Be Televised)”. Pretty great, eh? I can’t help but envision a circle pit full of androids and Martians tearing it up from start to finish. This is not quite the same old Anxieties. It’s more like The Anxieties on 24th Century performance enhancers secretly acquired from alien scientists (Shhhh! I shouldn’t be telling!). No doubt their next album is gonna be scary good (the demos on Bandcamp are sounding very Fuses-esque). In the meantime, Return to the Nowhere Zone ought to whet your appetite just fine. And the download’s only five bucks? That’s cheap! Clearly The Anxieties love you. You should love them back!

Email ThisBlogThis!Share to TwitterShare to FacebookShare to Pinterest
Labels: The Anxieties