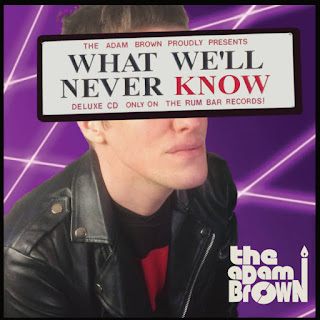 Out on Rum Bar Records is the deluxe CD reissue of What We'll Never Know -- the most recent album by Montreal-based indie rock band The Adam Brown. Originally self-released by the band last October, What We'll Never Know manages to be a different kind of release for Rum Bar while still fitting in perfectly on the label roster. Formed in 2004, The Adam Brown presents a very cool mix of musical styles -- think old school indie rock meets Brit-pop with touches of new wave, glam rock, garage pop, and contemporary modern rock. In recent years, I've developed quite a fondness for indie rock with hooks. With that in mind, What We'll Never Know is right in my wheelhouse. The sound is cool but in no way pretentious. The Adam Brown knows how to craft catchy tunes with big hooks, and the band's lyrics are an ideal combination of humorous, quirky, and thoughtful. Infectious pop tunes like "Indie Rock Has-Beens", "Hummin' Around", and "The Post" quickly had me designating this album as essential summertime listening. But much to my surprise, I've found myself digging some of the more "indie rock" sounding tracks just as much. With each subsequent listen, "I Will Let You Run" and "Spirit Tacos" lodge themselves deeper into my head.
There's a lot going on on What We'll Never Know. The album crosses a wide variety of musical and vocal styles and features the contributions of three drummers and a couple of co-vocalists. Yet the album is tied together by consistently strong melodies and an undeniable charm. Based on this album, I would absolutely want to see The Adam Brown live! At the end of the day, you just can't beat good songs. This is a record that's full of them -- with the new reissue tacking on two bonus tunes for a total of 12 tracks. I love how "Indie Rock Has-Beens" is hilariously self-deprecating even as it challenges stereotypes about hipsters. "The Post" employs a sports metaphor that just about everyone in my reading audience will get. You have to appreciate a band that can write a song about encountering tiny levitating disco fans in the jungle and actually have it sound like...disco! And surely The Adam Brown is the first band in the history of recorded music to pose the question of whether or not taco trucks exist in the afterlife. One of my favorite things about Rum Bar Records is how Lou is always finding records that deserve to be heard and introducing them to a new and wider audience. What We'll Never Know most definitely deserves to be heard, and I expect it will be a big hit with the Rum Bar fan base. Vinyl is still available directly from the band!
-L.R.
https://rumbarrecords.bandcamp.com/album/what-well-never-know-deluxe-edition
https://theadambrown.bandcamp.com/
https://www.facebook.com/TheAdamBrown/
https://www.facebook.com/RumBarRecords
Posted by Lord Rutledge at 7:31 AM