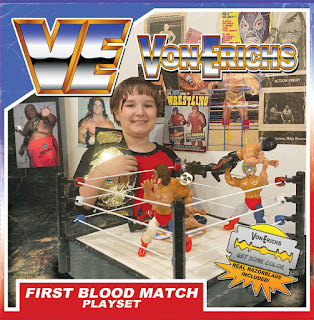 "I've got me a tag team partner -- and he’s the greatest tag team partner that anybody in the world could ever have!"
-Randy Savage, 1988
(Review by Ralph Rivera)
Well this came from one of my hair-brained ideas that Josh and I should do a "tag team" review of this album once it came out. I seriously love Josh, and we've been turning each other onto music since the '90s! So on to this album. Does it live up to the "hype"? Well as someone who's been an "insider" on this project since last year and ate up every song they released, I have to say this went beyond ALL expectations. If you have any knowledge of what's going on in the "Outloud/Mom's Basement" pop punk scene, you'll instantly recognize some of the voices on these songs. But first & foremost, you need to know this - if you didn't grow up watching '80s/'90s WWF wrestling, you'll have no idea what these songs are about. So what? Another gimmick band? Well let me tell you this - if you can write songs this good, sign me up. Starting with the intro song "Running Wild", this is pure pop punk perfection. A tribute to the one and only Hulkster! From that first round, you get songs about the joys of cocaine and some of the best wrestlers to come out of that era. And THEN you get "Kamala Ate My Baby". A song that breaks the mold and enters a '50s/'60s style vibe that enters once again with "Elizabeth" -- a beautiful retro style tribute to the FIRST ever female sidekick in pro wrestling with awesome co-vocals by the mysterious "Miss Lorraina". Songs like "Texas Tornado", "Figure Four", and "Ring Rat" just seal the match. Ending with the anthem "Horsemen Never Die", this is a pure labor of love by all members involved. Did this album live up to my expectations? Well let's just say this will tide me over until Black Russians drop their next manifesto to take over your weak, pathetic lives! This album is the musical equivalent to a chokeslam from The Undertaker. Just wrap your head around that!
-Ralph Rivera
(Review by Lord Rutledge)
As far as concepts album go, it doesn't get much cooler than a pop-punk supergroup doing a full album of songs about the glory days of professional wrestling. But what I appreciate the most about VonErichs' First Blood Match is how well the concept is executed. Even if these songs weren't about wrestling, this would still be a fantastic pop-punk record. VonErichs really know how to write top quality three-chord punk tunes and pound them out with power and precision. Great thought and detail went into the wrestling aspect of this release, but just as much effort went into the songwriting, musicianship, and production. So even if the wrestlers referenced on these songs were well before your time, First Blood Match is still a must-hear if you're a huge fan of modern-day pop-punk and Ramonescore.
Now of course this album is special treat if you're a fan later '80s/early '90s wrestling. These songs celebrate some of the incredible personalities that made pro wrestling so fascinating back in the day. Here you'll find tributes to the likes of Hulk Hogan, Brett Hart, The Four Horsemen, Randy Savage & Miss Elizabeth, and of course Kerry Von Erich. There are also songs that dig deeper into the old WWF talent pool (Kamala, Bad New Brown, Repo Man) as well as an homage to cocaine. And because this is a pop-punk record, you can expect some interesting twists on the wrestling theme. Leave it to VonErichs to turn the tale of Greg "The Hammer" Valentine into a love song! "Kamala Ate My Baby" touches on themes of love lost like no band ever has before. And "Smasher Gave Me The Ax (When Crush Started Coming Around)" -- about the downfall of the mighty Demolition -- is the ultimate breakup song!
Comprised of several stars of the pop-punk underground and assisted by some mysterious special guests, VonErichs have delivered a blood match that fully lives up to its billing. This release is right at home on Mom's Basement Records -- the reigning heavyweight champion of pop-punk labels. What a fun record! I've already got my fingers crossed for a sequel!
-L.R.
https://momsbasementrecords.bandcamp.com/album/vonerichs-first-blood-match
https://www.facebook.com/VonErichs
https://momsbasementrecords.bigcartel.com/product/vonerichs-first-blood-match-lp-cd-cassette
https://www.facebook.com/MomsBasementRecords
Posted by Lord Rutledge at 3:32 PM