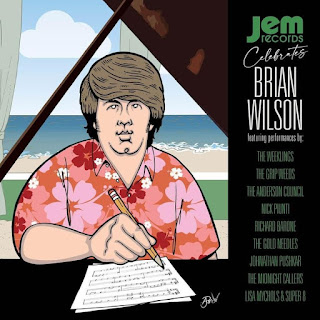 In continuation of its series of tribute compilations to the icons of rock, JEM Records today releases an excellent collection of Beach Boys/Brian Wilson covers. JEM Records Celebrates Brian Wilson has been released in conjunction with the 60th anniversary of the Beach Boys. Just like last fall's marvelous tribute to John Lennon, this album demonstrates the amazing things that happen when you put legendary material in the hands of creative and immensely talented musical artists. It features 15 tracks from nine of the top acts on the JEM roster. Each band/artist was given free reign to pick a Brian Wilson song and interpret it uniquely. What results is a tribute album that will restore your faith in tribute albums.
Covering Brian Wilson is an awful lot like covering John Lennon. You've got to do something pretty special when you're tackling material this magnificent and this beloved. If you stay too close to the original version, it's dismissed as pointless. If you stray too far, it's considered sacrilege. Your primary task is to celebrate a legendary artist, but you still have to make the song your own. With all of that in mind, I've got to say that the JEM roster has absolutely nailed this tribute to Brian Wilson. The songs selected range from classics to deep cuts, with the majority culled from the Beach Boys' Capitol Records heyday. My first reaction to The Weeklings' opening pairing of "The Warmth of the Sun" and "Help Me, Rhonda" was, "Wow, that's really good!" As I listened to the remainder of the album, I had the same reaction several times. All of these bands and artists have managed to put their own signatures on these classic songs. The Grip Weeds (covering "You're So Good To Me") and The Gold Needles (Covering "Love and Mercy" off of Wilson's debut solo album) interpret Wilson's artistry through their own unique lens of modern-day psychedelic pop. Both versions are stellar. Nick Piunti does the best cover version of "Hang On To Your Ego" that I've heard to date. Johnathan Pushkar's rendition of "Please Let Me Wonder" from The Beach Boys Today! is simply beautiful and wonderfully reflective of his unique charm as an artist. Richard Barone's take on "In My Room" suggests what the song might have sounded like if it had been recorded in 1966 instead of 1963. And the highlight of the album has to be Lisa Mychols and Super 8's stunning, girl group inspired version of "Don't Worry, Baby". It gives me chills!
JEM Records Celebrates Brian Wilson does what all tribute albums ought to do: it allows us to view the creations of a legendary songwriter in a different light. It's enjoyable in its own right, and it also makes me want to go put on some Beach Boys records. It's not that any of us have ever forgotten how great these songs are. But hearing them again as interpreted by some of the finest power pop and pop-rock artists of present-day gives me a renewed sense of appreciation for the immensity of Brian Wilson's talent. Even if you cast aside the imagery and mythology that has made the Beach Boys an American icon, you're still left with some of the most remarkable songs and beautiful melodies ever written. And as this collection proves, these songs sound just as good in 2021 as they did decades ago. Kudos to Marty Scott for having faith in his artists to pull off a Brian Wilson tribute that would live up to expectations. And as a special added touch, the liner notes for this album were penned by Ben Greenman, co-author of I Am Brian Wilson, A Memoir. JEM has set quite the high bar with the first two installments in its tribute series. Can it continue to deliver at this level? I have no doubt!
-L.R.
http://www.jemrecordings.com/
https://www.amazon.com/Jem-Records-Celebrates-Brian-Wilson/dp/B09483M8LH
https://www.facebook.com/Jem-Records-607560186079388
Posted by Lord Rutledge at 7:37 AM

Here's another cool cut from the album:
https://youtu.be/pz9t8BQI0eM