Vista Blue - "Magic On This Train" 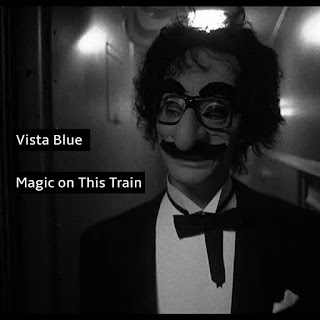 It's always a tremendous occasion when I can review new music from Nashville-based power pop punk band Vista Blue. New single "Magic On This Train" is a sneak preview of a set of slasher songs the band will be releasing later this year. "Magic On This Train" is an homage to the 1980 film Terror Train. If you did not know this song was about Terror Train, you might mistake it for a somewhat sweet love song set on a train. "There's gonna be magic on this train tonight with you" sure sounds like a wonderfully romantic line to me! What a nice little pop song! But then you start to wonder: what did these people do to Kenny, and why is David Copperfield on the train?
As a tribute to Terror Train, "Magic On This Train" is an absolute winner. If you've seen the movie, you'll recognize the references. But if you haven't seen the movie, the song won't spoil it for you. You don't have to be a fan of this movie or horror films at all to enjoy this song. This is a vintage Vista Blue track: an upbeat pop-punk tune with buzzing guitars, crisp harmonies, and a smattering of keyboards. It's just a super catchy tune. As a special bonus, Nick Spoon from Lesser Creatures contributes a nifty guitar solo!
I am continually delighted by Vista Blue's ability to write songs about a variety of subjects and still retain the same level of charm. I am notoriously not a big horror guy, but I always find Vista Blue's slasher songs amusing, endearing, and just plain fun. And I must admit: I really want to watch Terror Train now!
-L.R.
https://wearevistablue.bandcamp.com/track/magic-on-this-train-terror-train
https://www.facebook.com/wearevistablue
Posted by Lord Rutledge at 11:50 AM