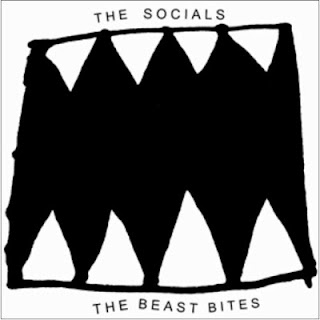 The Socials have been a band for 19 years and have just released their first 7". That's got to be some kind of world record. Somebody call Guinness. Better yet, somebody get me a Guinness. This heat wave is taking its toll.

Okay, so it's not like The Socials have never put out music before. They've released two CDs as well as numerous demos in various formats such as 8-track tape and answering machine micro cassette. But all that stuff's long out of print. And since it's hardly a stretch to refer to The Socials as legends of Cincinnati punk rock, it's imperative that some of their music be available for purchase at all times. The future of civilization is riding on it. I can't tell you how The Beast Bites compares to the band's "classic" recordings of the '90s. And that's because I never heard any of those recordings. Up until the early 2000s, The Socials were a band that I often heard of but never actually heard. I thought they might have been pure urban legend, like Chupacabras or gerbiling. But if I had to guess, I'd say that The Socials are one of those bands that's managed to continually improve its entire career. The "glory days" of The Socials are still ahead of them. Perhaps they're just late bloomers, or maybe they were simply too far ahead of their time. In any case, I'd say The Beast Bites is a perfect introduction to The Socials. It sounds like...victory. How fitting that it's out on the legendary Centsless Productions - the same label that immortalized The Slobs, Archie and the Pukes, and the Syphilitics on vinyl. Cincinnati über alles!

What I like about The Socials is that they don't sound like any other band. Sometimes they don't even sound like themselves. Who else out there is doing garage rock n' roll meets '77 punk meets minimalist art-core meets post-punk meets Killed By Death with female vocals and a dystopian/sci-fi angle? I think The Socials are possibly time travelers - or robots. I believe they may have formed in the year 2525 and honed their craft in London circa 1980. Full of lyrics about government, war, technology, and the future, The Beast Bites is your soundtrack to impending apocalypse. "The Future Has Let Me Down Again" brings to mind SST era Sonic Youth with sludgy Melvins guitars, while "Hot Tips" is straight-ahead catchy punk that you could compare to X-Ray Spex (or Bikini Kill if you're under the age of 40). "GoVermont" mixes an overt political message with an upbeat new wave sound and a sing-along chorus. I expect it to go to #6 on the dance charts. "Nouvelle Technologie" is slower and kinda creepy- which I believe is supposed to be the point.

Compared to what I have heard previously from The Socials, this record is at another level entirely. Musically and lyrically, they're hitting it like Joey Votto. Credit producer Andy Slob for really pushing the band to make a great EP. And clearly any old jokes about these individuals lacking talent or musical skill will have to be back-dated a decade or two. Mrs. Communication, Shawn Abnoxious, and Juice by Jerry have achieved the kind of chemistry that can only come from playing together for a very long time. The guitar/bass interplay on "The Future Has Let Me Down Again" is absolutely magnificent, and I really like the creativity of the song structuring. You think "Hot Tips" has ended, and then suddenly it rises from the dead and starts anew. That's kind of a metaphor for this whole group - which has outlasted all the bands it used to play with and will probably outlast most of the ones it's playing with now. By the time they release their true magnum opus, it will probably be downloadable directly to a computer chip in your brain. Shit's about to get weird - don't say The Socials didn't warn you.

Shit got weird when, by habit I went to the fb page fir The Socials and seen that I not only already liked them but I eas actually in the band.

Who is that robot thar looks just like me?

Not only have I felt validated appearing on Centsless Productions but now on Faster and Louder... This feeling must also be how it feels to ride a bike. No?

Since I have famously never ridden a bike in my life, I would not know. I did have a Big Wheel when I was a kid. Maybe that counts.