New one from Neighborhood Brats! 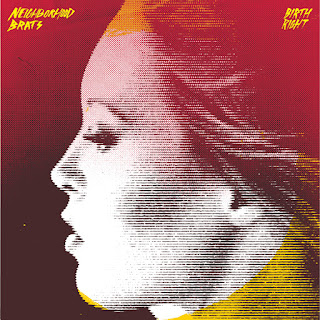 Damn! Neighborhood Brats just keep on bringin' it! Birth Right is their third 7" in less than a year and fourth release overall. And just when I thought that their last single could never be topped, they come back with a new one that totally blows it out of the water! If you are a fan of classic female-fronted punk rock and/or early '80s California hardcore, you've got to hear Neighborhood Brats. Like their East Coast counterparts Night Birds, Neighborhood Brats are genuinely as good as the legendary bands that inspire them (think Black Flag, The Lewd, Legal Weapon...). If I hopped in a time machine with a copy of Birth Right and made my way to Southern California circa 1982, nobody would suspect that I was playing them music from "the future". People would just ask, "Who is this incredible band, and when do I get to see them play?" I'm pretty sure some of you will have the exact same reaction if you push that play button!

Recorded during the band's transition from San Francisco to L.A., Birth Right doesn't switch up the style much from previous releases. It's still urgent, high-speed hardcore with a dark undercurrent and impassioned vocals from Jenny Angelillo. But this is the best-produced record that Neighborhood Brats have made, and that really brings out the power and and aggression of their music. The title track is the band's finest moment yet - propelled by phenomenal lyrics and superb guitar work from George Rager. It leaves you wanting more, and then gives you exactly that in the fast, frantic "Party Going Nowhere". A great cover of Youth of Today's "Break Down The Walls" and breakneck closer "Exit Strategies" make the B-side equally as exhilarating. Of course Neighborhood Brats get points for playing such a classic style of music, but what's more important is that they're a flat-out incredible band. Angelillo has star charisma, Rager is the quintessential California punk guitarist, and that rhythm section is tight! If you're currently unfamiliar with Neighborhood Brats, you'll also want to check out the compilation No Sun No Tan - which collects their first three EPs along with two previously unreleased tracks. Now is the time to get caught up. A new album is in the works, and you can bet it's gonna be mind-blowing!