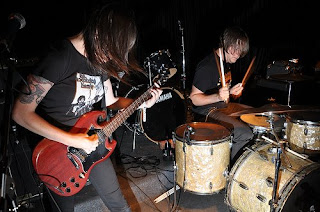 "So, Josh. When are you gonna review some post-punk?" Good question. How about now?!

Far too often, self-described "post-punk" is just dull indie rock with post-modern pretensions. Sorry: not my cup of tea (and I do enjoy tea!). My idea of post-punk is full-bore punk rock that happens to lean in an arty direction. I don't hear nearly enough of that sort of thing. So when I stumble upon post-punk bands that genuinely get it right, I'm always thrilled. Columbus, Ohio's Nervosas draw from the kind of post-punk I can really get into (Wire, Wipers, Mission of Burma) and add the proverbial unique touch. Yes, sir: here's a band that's anything but dull! They've got the clanging guitars, chunky bass, gloomy undercurrents, and hyper-anxious vocals down pat. Clearly they've listened to all the right records, and from a musical standpoint the chemistry is impossible to deny. Most importantly, there's an urgency and manic desperation in this band's music that's quite rare in this genre. Here's a band that sounds exactly like its name, and that's freaking cool!

Formed by Columbus couple Jeff Kleinman (vocals/bass) and Mickey Mocnik (guitar), Nervosas have released two full-length tapes and one 7". Thankfully, you can hear it all on the group's Bandcamp page. Latest full-length Descension (sounds like it should be a Joy Division album title!) is limited to 100 copies and surely deserves an exponentially larger audience than that. Powered by the dyanamo drumming of Nick Schuld, the first two tracks are veritable atomic bombs of art-punk. You'll search far and wide to find a better 1-2 punch to kick off an album than "Like Trash" and "APAB". And it's not like things go downhill after that, either. "Uncanny" might bring Greg Sage to tears of joy. The hard-hitting "Less Than Human" is what Fugazi would sound like if I actually liked Fugazi. "Waste of Time" and "x(n)" are so blazing and intense that they blur the lines between post-punk and hardcore/KBD. It's easy to overlook the songwriting because these three are so bang-on with "the sound". But ultimately, I think it's the superb quality of the material that really vaults this band to the head of the class. Best post-punk band I've heard in years. Check out Descension or be sorry!