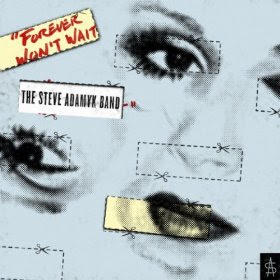 For the second time in the year 2012, I'm posting about an album that should have made my top ten for 2011. Forever Won't Wait, the second album from Ottawa's Steve Adamyk Band, is easily one of the best things Dirtnap Records has ever put out! And I know what formidable company that puts it in, because I'm working on that very list right now!

When it comes to poppy '77 punk rock, there's no doubt I'm cuckoo for Cocoa Puffs. And within that Dickies/Buzzcocks/Pointed Sticks niche of punk music, The Steve Adamyk Band is in the A+ top tier! Forever Won't Wait comes on like it was launched out of a rocket, and it never lets up the rest of the way. Just when you think you've heard "the hit", along comes another song that's just as good or even better! Everything about this album is top-notch, from the songwriting to the production to the vocals to the musicianship. I've heard of bands with stacked debut LPs due to large stockpiles of songs, but S.A.B. are on album #2 and still bringing all-killer, no-filler! That's talent. If you like super-peppy poppy punk with cool guitar leads and more hooks than a pirate fleet, you're gonna flip for the likes of "Take It Back", "I Run Wild", "Forever Won't Wait", and "Only Wanted You To Know"! The whole album is energizing and infectious, and the key is that this is a band that's fully embracing the pop side of the pop/punk equation. I'm still waiting for the announcement that these guys will be performing at the NHL All-Star Game next weekend, but it seems they'll be unfathomably snubbed just like my boy Scott Hartnell. I may have to send a strongly worded letter to league offices voicing my double displeasure. In the meantime, to regain my good spirits, I'll listen to Forever Won't Wait a few times. You should as well. Fans of Marked Men, High Tension Wires, and Stiletto Boys: this album is calling your name!