The Suicide Notes - Is That You? 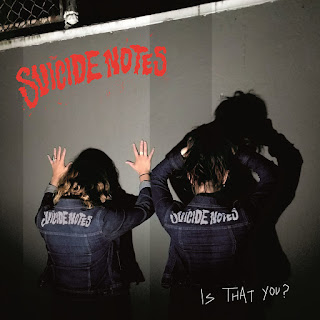 If you remember me totally flipping my shit over The Suicide Notes, you would have to be a long-time follower of this blog. That initial review was six years ago - the launch year of F & L. Honestly, I can't believe I'm still at it. Even better, The Suicide Notes are still at it as well! Out on Hovercraft Records, Is That You? is absolutely the smash hit debut album I was anticipating back in 2011. I'm a little late to the party on this one, so thanks to the band for dropping me a line and letting me know the album was out!

As far as I know, Is That You? is the first new music from The Suicide Notes in five years. While there have been a couple of lineup changes over the years, the harmonized vocals of Jessi "Lixx" Garver and Anna "Double A" Andersen remain the signature feature of this Portland, Oregon based outfit. And with drummer Tim Connolly (Epoxies, Sex Crime), bassist John Cox (Satan's Pilgrims, Pynnacles), and guitarist Petey J. Cool (Pure Country Gold) rounding out the lineup, The Suicide Notes fully qualify as a Portland punk supergroup. Is That You? is the full realization of all of the things I dug about The Suicide Notes from the start. The band still sounds like "a macabre Shangri-Las with a punk edge", and on this release those punk and girl group inspirations mix wonderfully with a number of additional influences. Of course those harmonies are to die for, and anyone who loves upbeat pop with a punch needs to be all over this record. Yet what I like best about the band is how cheerful the songs sound until you realize how dark and frequently twisted the lyrics are! "Baby Doll" feels especially poignant in our current social climate, and you can probably deduce that "Mutha Fuckin' Love" isn't exactly an upper. But I wouldn't have it any other way! It's hard to pinpoint standout tracks since the record is so consistently good. I will say, however, that the mix of musical styles is really satisfying. The album takes you on a non-stop thrill ride covering everything from exhilarating bubblegum punk ("Critic") to full-on '60s garage action ("Ghost") to classic girl group dramatics ("Back and Forth") to new wave pop/punk goodness ("Is That You?", "Velvet Crime"). It all adds up to an album that's super fun but by no means lightweight!

A debut album from The Suicide Notes may have been a long time coming, but boy did the band ever knock this thing out of the park! From the singing to the songwriting to the musicianship, the talent this band possesses is truly remarkable. You can bet that Is That You? will secure a spot in my year-end top ten!